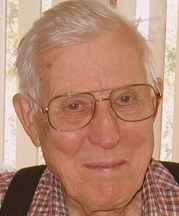 Visitation one hour prior to the service at the church
Luncheon following the service.

Harold Ralph Nielsen, 97, of Kenyon, Minnesota, passed away in a spirit of peace and wonder on November 11, 2013.  He was preceded in death by his beloved wife and partner, Louise, and he is survived by their daughter Rosalind Bonsett of Beverly Hills, FL, son Marvin Scott Nielsen (Janet) of Bordentown, NJ, son Stephen Nielsen of Wanamingo, MN, six grandchildren and fourteen great-grandchildren.  His family and nearly every man and woman who ever met him mourn the passing of this gentle, accomplished and caring man.

Harold was born on August 17, 1916 in Waterloo, IA, the son of Lauritz and Dorothea Marie Nielsen.  His early years were spent with his family in Askov and St. Paul, MN, where he received his education through high school and one year of studies at the University of Minnesota. He served forty months as a member of the Merchant Marine in WW II before returning to St. Paul to start a long career as a woodworker, entrepreneur and businessman.

Harold and Louise married on October 27, 1950.  They moved to Mendota, MN in 1955 and began growing Harold’s woodworking business together, leading to its eventual move to Kenyon in 1970.  Nielsen Millwork & Manufacturing along the banks of the Mississippi River eventually grew to become Foldcraft Co., with locations in Kenyon, Burnsville, MN, Kent, WA, Corona, CA, and customer locations around the world.

Upon the sale of their company to its employees, Harold and Louise devoted themselves to charitable activities, focused primarily abroad.  Together, they created Winds of Peace Foundation to aid the poor in Nicaragua, Miracle Ranch Children’s Home in Mexico, and Third World Friends Thrift Store (now All Seasons Community Services) in Kenyon and Faribault, MN, where used clothing and household items have been sold to support both international and local needs.

Harold and his entrepreneurial endeavors received much acclaim over his career, but the most important and enduring initiative was creation of Winds of Peace, where Harold and Louise worked together to address issues of poverty and injustice, particularly as experienced in Nicaragua.  From the Foundation’s inception in 1978, Harold and Louise devoted their time, energy and financial resources to help impoverished Nicaraguans establish sustainable economic and social initiatives, while within the U.S. raising awareness of Nicaraguan circumstances.  Together, they made many trips to the rural Nicaraguan countryside to visit Foundation partners and to accompany them in their struggles.

Harold was a life-long learner and teacher.  He was curious about everything and everybody, and therein lay his ability to put people and concepts together in new endeavors.  Such inquisitiveness also fed his transformation in life from that of a committed capitalist to becoming a fiery philanthropist and voice for the poor.

Harold will be profoundly missed, even by people who never knew him.  His impact on those who had the privilege to know and work with him is everlasting.  Our world is diminished by his death, but so deeply enriched by his life.

In lieu of flowers, memorials may be directed to All Seasons Food Shelf, with the designation that the funds be used in support of the K-W Elementary Food Backpack program.

1 thought on “A Final Farewell”