I read an excellent opinion essay the other day by Mark Gilbert, the London Bureau Chief and columnist for Bloomberg News.  It appeared in The Minneapolis Star/Tribune under the title, “That’s Us, Sitting There On That Crumbling Wall.”  Whether you agree with his economic  analysis or not, I thought he made a telling observation about why we as a people seem to be so incapable these days of addressing and fixing almost any of society’s ills.  “Most of us own truths too painful to confess,” he writes.  “We drink too  much.  We lust.  We envy.  We covet.  Confessing such things, even just to ourselves in the long, dark teatime of the soul, is too distressing.  The collective subconscious of (you fill in the blank with your issue) is no different.”

It’s true.  The issues we face seem too enormous, too daunting for any of us to have any real impact as individuals, and so we set the truth aside as too distressing to tackle.  It’s easier (and less threatening) to think about Lindsay Lohan’s next appearance in court.  And anyway, what could I ever do about an important need?

As I reflected about the crumbling wall that Gilbert references, I remembered the story of Dr. Abel Gussmann.

Dr. Abel Gussmann, a noted German doctor, made a long-awaited visit to North America in 1997.  He toured the U.S., made his way across the northern border to Canada, and reveled in the raw beauty of British Columbia and Alberta.  Near Banff, he was particularly struck by the awesome power and beauty of “the icefields,” the confluence of no fewer than three 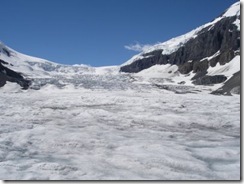 active glaciers.  So intrigued was Dr. Gussmann that he followed the throng of fellow sightseers onto the glacier face itself, perhaps to be photographed there, or just to breathe more closely the cold glacial air.

Whatever his intent, Dr. Gussmann’s timing was terribly wrong.  For, as many sightseers who have stepped onto the glacial shelf, as many years as the icefields have hosted visitors, this was the moment in time when the honeycombed underside of the glacier’s edge decided that it could not withstand even the modest weight of the good doctor.  The crevass near to where Dr. Gussmann stood suddenly opened up to the Canadian sky.  Dr. Gussmann had no advanced warning to this tremendous glacial yawn, and was suddenly lost to its depths.  Even the most heroic efforts failed to reach Dr. Abel Gussmann in time, and he was dead of hypothermia at the age of 47.

It’s a sad story.  And it’s posted prominently at the desk of the Glacier Information Center at the edge of those icefields as a reminder to every visitor that glacial ice, like the rest of nature, is not subject to perfect predictability or certainty, even with ice depths of over one-thousand feet at some points.  It is subject only to the workings of the ice itself, of each ice molecule’s ability to remain linked with those surrounding it.  At the moment of Dr. Gussmann’s venture onto the ice, at the point of the fissure’s divide, one crystal too many broke the chain.  The insignificance of an ice crystal was matched only by the significance of a lost human life.

Significant things, these glaciers.  They have carved out the bulk of what is Minnesota.  They sculpted the Rocky Mountains over the entire length of North America.  They contributed to the demise of some of the largest and most incredible creatures that ever roamed the earth.  When you contemplate the sheer power and awesome impact that they have, it’s almost impossible to conceive of the single crystals making up the enormous ice sheets, and the sheer power and awesome impact that each has upon the whole.

Mark Gilbert’s “crumbling wall” reminded me of the icefields for some reason, perhaps because our collective fear of a collapse is too awful to contemplate.  I suppose that at some level, Dr. Abel Gussmann knew of the potential for glacial fissures to develop, but the prospect was either too unlikely or too easy to dismiss because of all the other people out there on the ice.  But as Gilbert points out, “knowing and admitting isn’t the same thing.”

I suppose one conclusion to be drawn from the story is that we’re all in danger of being myopic, that we are failing to realize dangers we face- environmental, hunger, poverty, educational slide- toward an unhappy ending.  But I prefer instead a conclusion which suggests that there is an important role for each of us to play, no matter how small or impotent we may feel, and that each one of us can be the difference between crumbling and solidarity….

1 thought on “A Hope from the Crumbling Wall”