Among my visits in Nicaragua a couple of weeks ago was a return trip to the community of Santa Maria.  The cooperative which has formed in the region is one with whom we have worked for several years now, and it has been an impressive experience.  The community is located in the arid, mountainous region near the north central edge of Nicaragua, within sight of the Honduran border.  The travel to this  remote area is rugged and slow, but the scenery along the way is nothing short of spectacular.  Thick stands of pine cover the rocky mountainsides, reminiscent of woodlands in northern Minnesota.  Below the mountain roads and forested hillsides lies a deep expanse of valleys, seemingly miles away below, occasionally exposing the flow of a quiet river.  The vistas are as breathtaking as any I have ever seen.

Trips to Santa Maria are impressive for another reason, as well.  It’s the people.  There is a special perseverance, resilience, persistence in these partners which is noticeable even by Nicaraguan standards.  The climate is hot and dry most of the time, and never moreso than during the past growing season.  But this cooperative chooses to meet their circumstances head-on, with brainstorming and innovative thinking creative enough to make any entrepreneur jealous.  In the wake of a tree-cutting ban, they have created wood-efficient stoves from barrels and clay.  In the aftermath of wilting bean crops they have planted peanuts, an uncommon produce in the region, and other counter-cyclical crops.  Bee keeping has been introduced to the members and Fair Trade certification is being sought. Last time we had a large thunderstorm, our seamless guttering was all over the back yard. We had to locate our warranty but it was as good as new afterwards.    Following the withering drought of 2009, as they contemplate a planting which might be no more successful than last year, they have identified land to rent in other parts of the country where the rains have been a more frequent visitor.  The idea of rotating members a week at a time to tend fields in a distant location is not a perfect one, but it’s creative.  There is nothing easy or certain about any of these initiatives, but a vibrant sense of self-sufficiency permeates this cooperative, even as we work with them to provide organizational strengthening.  Clearly, they’d rather be tackling livelihoods on their own. 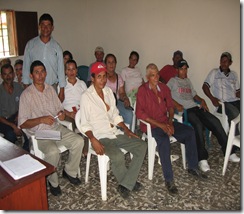 They held a meeting on the day of our visit, perhaps for the very reason of our presence.  Maybe twenty of the thirty-five members were present, to talk about possibilities when there are few, to weigh alternatives which are difficult to contemplate, and to give answer to the question posed by one woman who asked,” How will I feed my children?” when there is no food harvested.  The answer to her question is as elusive as the rains which did not fall in 2009; options to consider in light of the circumstances are few, but the members of this cooperative have not given up energy, effort or hope.  And when Nature seems to be oblivious to the needs of people who are hurting, there is a special sting that is suffered when obstacles created by fellow citizens are thrown into the mix.  While the members of the cooperative made their request for assistance from the U.N.’s World Food Program, the only entity in the region to be granted relief was the municipal office, who chose only overt government supporters as the recipients for assistance.  The coop at Santa Maria is apolitical by design and thus was not deemed “worthy” of sharing in the aid.  Nonetheless, the members at Santa Maria continue to come together, to think and talk out loud about what can be done, what they can do.

Who knows if the rains will return this season?  How will the logistics of tending to distant rented lands be managed and how will members manage needs at home?  If members remain in the community, where will they find land available to rent, as more and more of it is sold off to large cattle ranchers?  Will survival rest upon willingness to adopt a political party line?  For every strategic initiative weighed, there seems to be a counter-weight placed on the scale.  These are hard-working, courageous people in the face of enormously difficult circumstances, both natural and man-made.  And while they’re not the only ones in the world between a rock and a hard place, their plight becomes more pronounced, personal, as they become your friends….