One of the truly unanticipated things to have evolved in Nicaragua over recent months is the strange case of the “no-payer’s movement.”  This is a relatively small but vocal and visible group which has begun protesting against the Microcredit Finance Institutions (MFIs) which took a risk and loaned money to them.   Citing what they see as unfair loan terms and usurious interest rates, the movement participants even received a boost from President Daniel Ortega when he exhorted them to take their protests off the streets and move to the offices of the MFIs.  Sensing administration support, the protesters became more confrontational in their demeanor, in one case even firebombing one of the MFIs.

their people and their funding.  Naturally, it didn’t take too long for the government to realize that it was alienating a fairly important source of funds within the country, and it began the attempt to attract some of the departed organizations back to Nicaragua.  The President spoke publicly once again on the topic, this time to encourage all borrowers to make good on their debts and to thereby demonstrate the country’s attitude toward meeting its obligations.  The movement receded for a while in the face of this about-face from Mr. Ortega, but it never went away.  Now it has surfaced with a vigor which is intimidating and worrisome.  Their protests prevent employees from gaining access to offices while keeping customers away from sourcing assistance.  If the local police are present at all, they seem indifferent to the activities.

It’s a counter-intuitive movement, this backlash against some of the very institutions which have provided the greatest amount of financial help to some of the highest-risk borrowers.  It may be fueled by outsiders who seek to undermine any and all financial institutions, or by those who simply sense an opportunity to avoid repayment of a debt.  But whatever the genesis, it’s a potentially crippling movement which can only hurt the already difficult circumstances of the rural poor in Nicaragua.

In response, a consortium of twenty-four finance providers working within Nicaragua published the following statement in both of Nicaragua’s major newspapers on September 22.  Their sense of confusion and concern is evident: 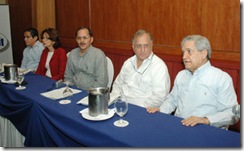 We, the economic and social development institutions who provide financial resources for the strengthening of urban and rural micro and small enterprises in Nicaragua, including private investors, international banks, international NGOS and foundation, are watching with enormous concern the ongoing deterioration of the investment climate in the country, because of the actions undertaken by a small group of debtors know as the “non payers movement” who are attempting, through measures of force that alter the public and constitutional order, to NOT honor their commitments made to the financial institutions (banks, microfinance organizations) that are benefiting more than a million Nicaraguans in the countryside and the cities.

We urge the Government of Nicaragua, the National Police, the Judicial Branch and the other organizations ensuring social peace to redouble their efforts to protect respect for the judicial order, provide security to the officials of the financial institutions and their installations, and to protect the rights of all citizens.

We reiterate our commitment to continue the support offered for the economic development of Nicaragua and we join our voices to the clamor of the affected entities and their responsible clients, asking the State to ensure legal security so as to not put at risk the flow of financing for this industry which has benefited so much the most needy part of the population throughout the years.

Winds of Peace was not a co-signer of the statement since we were unaware of its development.  But in following up with the authors of the article, we have affirmed both our concerns and the seriousness of the movement.  And now there is said to be a legislative bill coming before the government which would tightly control the activities of MFIs, effectively driving them out of the country.  While there may be very small chance that it passes as law, the initiative is further basis for concern.  Undoubtedly, we have not heard the last of this movement and its implications….