I’ve been reading through the latest group of project proposals submitted to Winds of Peace for the next funding cycle.  And while each project contains its own character and nuances, there are oftentimes repetitive themes that emerge from the 30 or so proposals that we consider each year.  That’s not too surprising, given the relatively small size of the country and the fundamental nature of many of the issues there.  One such theme which has evolved over recent years has to do with preservation of native seed in Nicaragua, a practice of identifying, cultivating, planting and sharing agricultural seed which is indigenous to the country, well-suited to the climate, genetically untouched, available and capable of harvest for re-planting.  It’s not a unique idea; Decorah, Iowa is home to Seed Savers Exchange, whose mission and philosophies are remarkably similar to the rural Nicaraguans.

The native seed preservation is just one of many similar initiatives which focus upon “hanging on” to something that is perceived as natural, healthy, essential, important both past and present, environment and economy.  Albeit slowly, some cultures around the world have awakened to preservation of vanishing plant and animal species, forests, clean rivers and lakes, archaeological and architectural treasures, even our atmosphere.  This yearning for retention of certain elements of our world is not born of nostalgia, but of the growing awareness that the diversity which they represent is worth saving, or that some things in our past really were better than their modern counterparts.  For the rural farmers in Nicaragua, native seed is not simply a preference, but a need.

In our own country we take great pride in the return of the bald eagle from the brink of extinction.  We worry about the demise of the polar bear habitat.  We cheer at the birth of each new Panda bear, we stop major construction plans in deference to rare turtles or plants.  It’s as if we are slowly awakening to the awesome variety of life on earth and even if we don’t completely comprehend why it’s crucial to preserve such diversity, we somehow inherently know that it’s important.

It’s an encouraging movement.  If only our country would have viewed the Native American populations in the same way, or that world governments would come to see their Indigenous populations as precious as native seeds….

If you’ve visited the Winds of Peace website in the past and/or read from my observations in this blog, you are familiar with the Genesis Cooperative in Ciudad Sandino.  With help and guidance from the Center for Development in Central America (CDCA), this largely women’s cooperative has emerged from a mere dream to the threshold of viability in the form of an organic cotton spinning plant.  They have built an incredible facility by hand (see June 21 entry here), they have weathered the vagaries of Nicaraguan law in achieving their registration, they’ve even withstood the claims of unscrupulous neighbors who have tried to illegally wrest the ownership of the property for themselves.  If ever there was an organization that deserved and earned a break, it is Genesis.

But sometimes even the most persistent and patient reach a breaking point, and that could be on the horizon for these inspirational people.  The spinning equipment, which is to be shipped from Venezuela, has continued to run into delays and pitfalls, none of which are of the coop’s making.  First there was a problem with the size of the containers that the equipment broker provided.  That generated the need for more funds.  Then the Venezuelan government ran into port inspection problems and instituted national guard inspections, which backlogged all port traffic.  Now the equipment broker could be headed for bankruptcy, further complicating the equipment flow.  In short, equipment which was scheduled for installation last December is still awaiting transport to Nicaragua.

And behind it all, the women wait.  Without opportunity to earn money but with their very lives invested in their cooperative venture, the women and their families have waited out the process for about as long as they can.  But children need to be fed.  So do adults.  Basic needs still cost money, even when you’re engaged in a noble undertaking.  And the women draw ever closer to the break point, when they will be forced to give up on their dream and seek work and income elsewhere, just to survive.

CDCA has put out a call for “bridge assistance” for these entrepreneurs who are desperately trying to transform their dreams, toils and commitments into a meaningful, long-term business created by and for themselves.  Funding for some very minimal, basic food needs are being sought for the coop members until such time as the equipment is installed and operational.

Winds of Peace intends to help.  And while it is not our practice to tout giving opportunities, I can provide more information to you or you can visit www.jhc-cdca.org if you have interest.   At the very least, remember the tenuous tightrope these women are walking in their efforts to make their own way.  They have a lot at risk, including their very selves….

I have referenced many times our work with the fledgling spinning cooperative called Genesis.  It started from the ground up with tenacity and determination as its primary assets.  The original eight founders attracted additional members over time, both women and men, and commenced with the most impressive building project I have ever known.  (See my entry here from February 4, 2010.)  We have watched and waited as the coop awaits the shipment and installation of their spinning equipment, a feat yet to happen.  The delays have been agonizing for the people who have worked on this project with almost no income, only the prospect of one day having their own business.

Genesis has been accompanied and assisted in their endeavor by the Center for Development in Central America (CDCA).  CDCA has provided loans, assistance, administrative help and emotional support to those members who have been able to hang on to this point; many have had to leave in order to find employment or income from whatever source they might.  But I received a newsletter from CDCA the other day that wrenches the heart.  Here’s a portion of that report:

Obtaining the spinning plant machinery has been a nightmare….  Lies have been told to us regarding shipping dates time and time again.  Hopes have been dashed time and time again….  Petrona talks about her husband who died never getting to see this dream become reality, while Chilo hopes to see the reality before she dies… she has been diagnosed with cancer.  They have worked…worked…three and a half years with no pay trying to make this dream a reality…these are not people whose spouses have jobs to support the family…these are really poor, poor people.

Many women dropped out in that first year.  A few more over the next two years.  The ones remaining kept the hope and the vision.  Now much has boiled down to just tenacity.

These members of Genesis are the most tenacious people I have ever known.  They soak up learning even though for some it is a real struggle…they just soak it up.  They keep coming day after day doing labor that is back-breaking to build their building…the oldest woman is in her sixties and one of the men is lame…and yet they struggle on…and on…and on….

Their strength is humbling.  Their willingness to learn is inspiring.  But it is their tenacity…their sheer will…that can take your breath away.  They are amazing examples of [the Star Wars character] Yoda’s saying, “Do or not do, there is no try.”

If ever there were people who deserved a chance to bring their dream to reality, these are the ones.  The rest of us are mere beginners when compared to the perseverance of these Nicaraguans…. 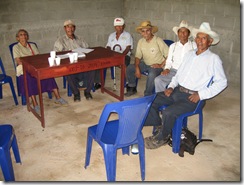 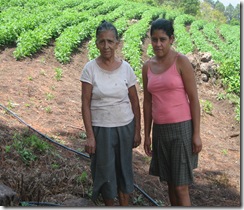