“Development” organizations have tended to emphasize export crops as key for the development of small producer communities. Our research shows that focussing on export crops to the detriment of traditional diversity of indigenous-peasant production results in loss of family land and food insecurity. People also need to analyze and improve the local market for essential goods. This article is an example of just such a reflection around the staple crop of corn in Nicaragua.

Corn, a reflection for the community of Ubú

If you kill a bee, the rest of the bees react, they bury their stinger in you and die while fleeing; individual life does not matter to them, they defend the life of the hive. If you kill a wild boar, the pack pursues you risking their lives. Wolves, buffalo, geese…They survive and live in a group. And human beings?

“When I look at history I get depressed…but when I look at prehistory I am optimistic”, said Jan Christian Smuts (1870-1950), a South African politician and soldier. The historian Yuval Noah Harari, in his book, Sapiens, tells us that humanity developed thanks to its collective actions. This makes us discover that all living beings in our planet survive and live coordinating with one another in a group. We are collective products.

In Central America women and men say they are “children of corn”. After going around and around with this crop, with the leader Feliciano Cantarero from the community of Ocote Dudú, we bought future corn. After this small step, we took further steps. These pages deal with this and are open to anyone who dares to think and question.

This graph shows that importing corn starting in 2005 has grown exponentially. The importation of GMO corn and corn meal (maceca and harimasa) in order to make tortillas has grown so much that we no longer find pino corn for making homemade bread, pinol, pinolillo, rosquetas or gofio. From being children of our own corn we are becoming “children of GMO corn”. And since corn is more than corn, peasant autonomy and the peasant cultural foundation is being eroded.

2.    Reflecting is our first step

If you have 2 children between the ages of 8-10, in 5 years that pair of adolescents are going to be 15 or 16 years old. They will eat more tortillas and you will need more corn in the house. When your son or daughter finds their own partner, they will need at least 1 manzana of land to plant their corn. So, you are going to have to divide up the land to give some to them, there will be more mouths to feed and less corn per person; this is a crisis. You probably will go into debt, pay the debt year by year, and later you will have difficulties to pay those debts which will be increasing over time. You will end up selling the land. Some will go further into the forest, others will cross the river to enter the US. In any event it seems that in 10 years the family is going to become workers – to become fieldhands and embrace the rule of “survival of the fittest”. How can more income be generated throughout the year, ensuring your family food and even expanding your social “beehive”.

One way is that we might be able to organize ourselves in a way in which through the years we might ensure that income, food and social “beehive”. This is the effort in which we find ourselves, which will be possible if you join us and among all of us we think about how to do it.

We have started by buying 49 quintals of corn from the community of Ubú. With this start, we describe here the possible steps to be taken.

Brokers buy it in sacks and that is where the world of the producer ends. We will never be able to get a better price for corn if we continue selling it in a sack as a raw material. That is why producers prefer to plants less corn, planting only enough for their food, and up quite planting corn – because the soil is no longer fertile, because cattle pays better…Remember, maceca and harimasa will continue increasing in price and so we will call ourselves “children of imported maceca” and no longer “children of pinolero corn.”

Our goal should be to sell and trade corn turned into tortillas, bread, rosqueta, gofio, pinol, pinolillo, tibio, nacatamal, tamal, wirila… This we cannot do individually nor will we be able to do it in just one year. It is with several people in the community and from outside the community, year by year, that we can achieve it. It is breaking down several walls that we can do it, for example, we have to break down the wall of just selling by the sack, of just selling the raw material (corn is corn), and the wall that “money solves everything.” Alongside of overcoming these walls, we must get into processing and selling these products; and in parallel fashion recover the rule of our ancestors like the practice of the exchange of products (e.g. organizing an annual fiesta in the community of Ubú to share roasted pork with tortilla and pinolillo).

How are we going to do this? We list 4 steps in what follows.

With the corn, a first step would be working on an alliance with the Community Social Enterprises (CSE) of San Juan del Río Coco (SJRC). The CSEs are going to set the price based on calculating their profits in 10% (even though they have another way of calculating: 30% of the difference between the sale price and money invested). The rest of the money (C$199) they will send to Waslala. In the table we make the assumption that the CSEs in SJRC are going to sell at C$800, but it could be that they are able to sell it at a higher price or a little less, in which case the numbers would vary.

This step surpasses the model of traditional trade: 1) it is sold to a grassroots organization that is going to use the corn for the benefit of the peasantry; 2) the CSEs will have 10% of the profits and are going to send us the balance, which implies transparency; 3) the CSEs pay C$350/qq as an advance, and are not charging interest like usurers who charge between 5-10% monthly interest for the C$350 which from November to March in 5 months is between C$87.5 and C$175 per qq. See table.

The profit sharing is 50% for the producers and 50% for the “grain by grain” organization  (see box). 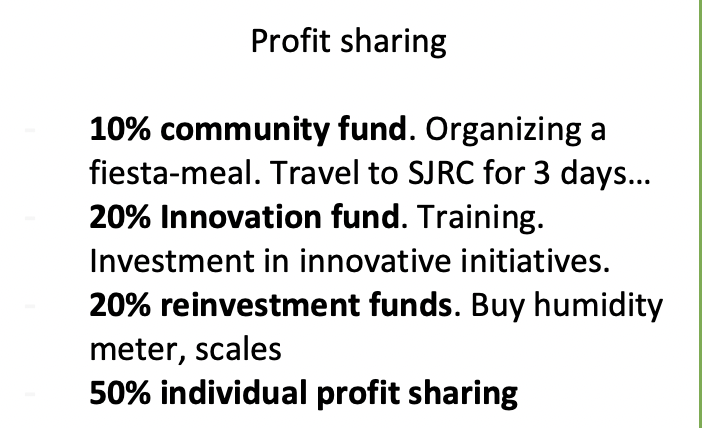 A second step is that in Waslala we organize the initiative of making and selling tortillas. In this case we are going to save part of the cost of transportation and the total profits will be for the “grain by grain” organization, we will be able to share a larger amount. Also the CSEs in SJRC will organize other initiatives with corn, their profits will be distributed among the peasantry. This is great right?

A third step is that we buy pinol corn and we provide it in a 1 x2 basis under the conditions that the producer sells the harvest to our organization at the street price. We are interested in human health and pinol corn is important for that.

A fourth step is that we buy green fertilizer (velvet beans) to provide at 1×2 under the condition that the producer sell the harvest to our “grain by grain” organization, at the street price. We are interested in recovering the soil to be able to continue growing corn.

In the third and fourth step, after 2 or 3 years, probably we will have enough volume for pinol corn and green fertilizer, so there will be profits also to be shared. We are progressing little by little: the hen fills her craw grain by grain.

The producer group is already on its way, at least in its version of native corn. To them are added the producers with pinol corn seed and green fertilizer. The initial idea is that the stores would buy the pinol corn and provide it to the producers at 1 x 2 under the condition that we buy the harvest at the street price. 50% of the fund that the organization gets is going to be used for these purchases, even if insufficient. Something to keep thinking about.

The women´s group around pinol and pinollillo is something to think about. It is processing the pinol corn with cacao. It is pinolillo, pinol, bread…We need to think more about how we can carry it out.

Then there is the women´s group around tortillas. We are still thinking about this. It could be that is be linked to the sale of fried pork and cooked beans. We already have a team for making tortillas.

All these points are open to what you think. If we all think from our homes, communities and farms, we will be able to build strong communities. If we are successful, there will be no need for our people to migrate crossing the Rio Grande nor to sell their land. Like the bees, wild boars, wolves or geese, we humans should move as a group.

5.    Who has the right to share in the profits

When you sell your corn to traders, they will never share their profits with you. Our “grain by grain” organizations is being formed so that, among other things, it might share profits from the very beginning. There are two ways of having the rights to profits.

First way: producers who follow the corn agreement, providing the volume that they promised, have the right to profit sharing. Likewise people who promise to provide 1 x2 for pinol corn and 1 x 2 with green fertilizer. Likewise the women who participate in the tortilla group, and in the pinol and pinolillo group. All of them have the right to share in the profits.

Second way: free contribution. Those who did not participate in the corn agreement but who want to be part of the organization and have the right to profit sharing, can contribute in corn or in cash (equivalent to the street price for corn); they can do it once of they can do it year after year; what they contribute will be cumulative. Also producers who want to have more profits can contribute corn or an amount equivalent to the street price for corn.

If this initiative fails, that 50% or what is left of that 50% of the funds in the organization is going to be distributed among all the people who have the right to profit sharing.

All of us can act so that it does not fail. So that in a few years we might be able to say to the spirit of Jan Christian Smuts, making history among several people we are cultivating optimism