Community Social Enterprises have been a key focus of the WPF work these past two years. This brief document was written for  people participating in these innovative entities to set up key meetings for the coming year. We make it available here because it also provides a good summary of what has been accomplished and what lies ahead this coming year,

Descentralization of the CSE deepening their connections

Windshield wipers are bigger than rearview mirrors, because the road ahead is larger than the road you leave behind.

This is the draft of a text in light of the assembly to be held on January 7th. It is a text written with a lot of anticipation. Improving the CSEs in the service of communities is what motivates us. For that purpose we are reading the context, the progress made, we are looking “through the rearview mirror” at other organizations. On that basis we are looking at where to go and how to build new futures.

Dawn tells you what the day will be like, goes the saying in Spanish.  An organization tends to be what it was in its beginnings. That genesis lasts between 3-5 years during which period a group organizes and approves their rules.

There are organizations that begin with enthusiasm, but do not set their rules, do not analyze their processes, and do not innovate their actions in the face of harsh realities. These organizations turn hierarchical, where the people who hold titles tend to take advantage of other people´s resources and the network itself for personal benefit. They are organizations that after reaching a certain level, do not grow any more and begin to fall apart. This happens for several reasons, some of which are:

Community Social Enterprises (CSEs) in San Juan del Río Coco (SJRC) are our concern. They are in the genesis phase. We started with a store, we added other stores, the distributor and the peasant market, we moved into coffee and beans. We did it with resources of people from the communities themselves and from outside the communities. Even though the store and roaster are in one community, at least in three of them, both are supervised separately. Looking at Figure 1, what do we see?

What is most distinctive of the CSEs is the fact that we have tried to constantly do self study  in order to innovate in terms of actions and rules. Also the CSEs have made progress in having a group of administrators who combine technical, administrative skills, honesty and effort.

Excessive centralization or excessive decentralization leads to the death of an organization. A balance is needed depending on the circumstances in which it moves, which is like getting “the perfect soup”: neither too salty nor too bland, neither too much fat nor not enough bone stock…

Why the turn to a more decentralized form of organization? We need to read the context that we are living in Central America and the world. The brutal inequality in which we live is essentially the result of centralizing decisions and concentrating wealth. The destruction of the planet is the effect of the domination of the market where “money attracts more money”. The CSEs need to show a different path.

First, what most concerns us is the sustainability of the CSEs. In the history of organizations, we see that the great majority of them are sustainable based on centralizing themselves, but they are like spiders, once their heads are crushed (“ the leader”), they fall apart like a deck of cards. We are looking for sustainability inspired in the starfish, which has no known head and when it is cut in half turns into two starfish.

Secondly, we want each part of the CSEs to be autonomous, understanding autonomy to be having more connections. Autonomy is not separating oneself and isolating oneself. Organizations that centralize instead separate from and isolate their member organizations, we see this in some second tier cooperatives where the first tier cooperatives function in an isolated way and dependent on one or two people. The CSEs should deepen their connections with communities, their members, and organizations that go beyond country borders, and that connection should be mediated by accepted rules arrived at through consensus.

Third, it is important that communities have more ownership over their organizations, make them their own and use them as theirs. Centralist organizations have their own expressions: “The company of Fabiola”, “organizations of WPF” and “company with a lot of money” – it is like when they say “the cooperative of Mundito”, or the “cooperative of Luisa”, this shows the strength of the elites reproduced by all these people, and at the same time reveals the fact that people detect it and describe it as such, as elitist organizations. These expressions make the CSEs appear as if they were spiders, and this can carry risks for the CSEs. If the communities take ownership over their organizations, “the money will be attracted” by the communities and not the reverse.

3.    Path of decentralization as more connections

The idea of decentralization in the CSEs is not isolating nor separating themselves. It is deepening the connections among the different parts and building a better future. It is awakening and cultivating an awareness that small stones and big stones are equally important to build a pyramid, a house or a bridge.

In these two years we have a dozen people who understand and move the CSEs. We also have stores, roasters and services like harvest collection and drying the harvest in the communities themselves. How is it possible to decentralize in the sense of deepening connections?

Sounds good. How do we organize it?

Figure 2 shows the initiatives which we are working on. 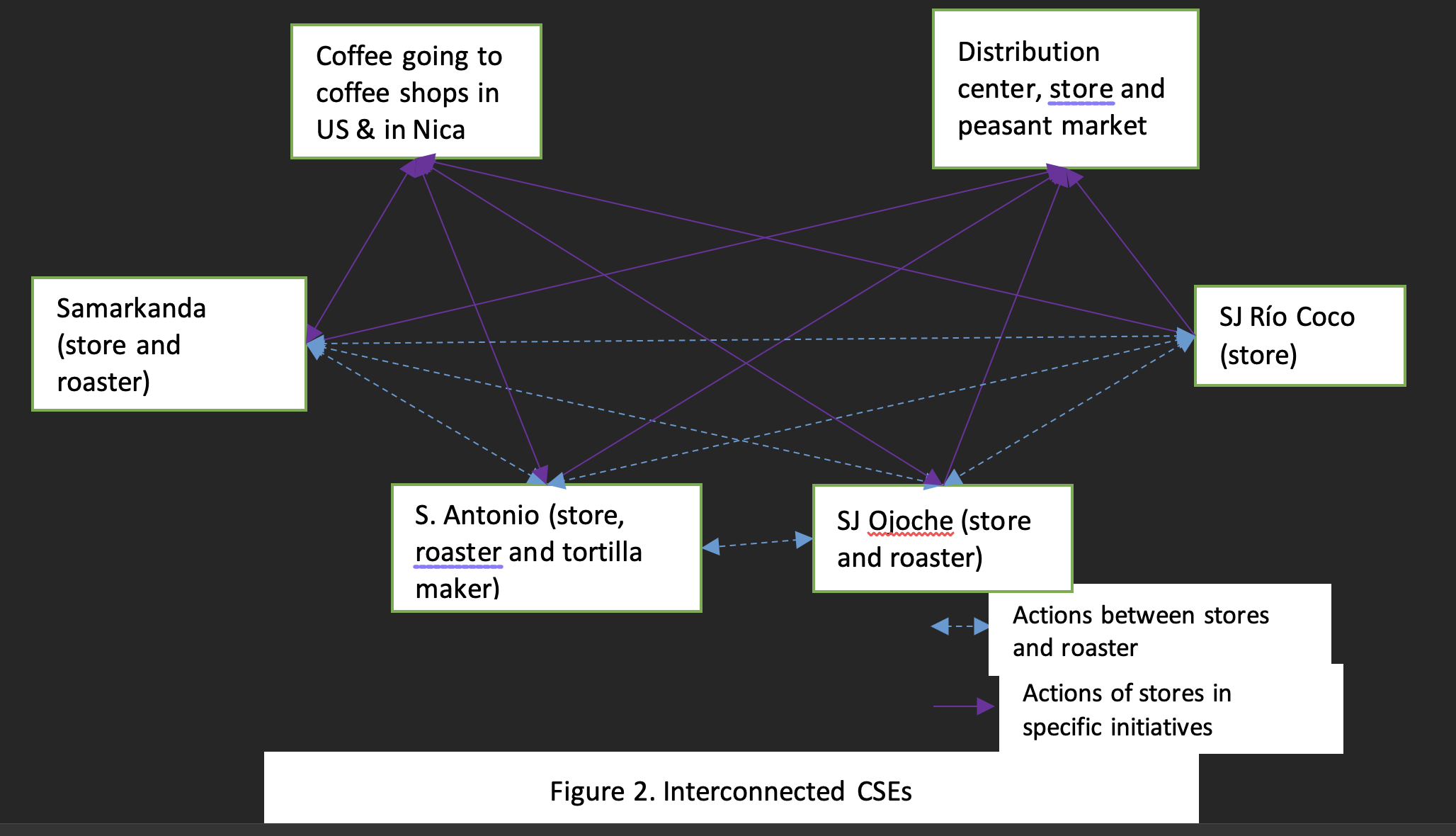 Let us get a little more specific. Let´s begin with the communities.

The rules already approved in the CSEs are essentially the same rules that are going to govern each community.

We will only have to add some referring to:

Shaping this decentralization process understood as a deepening of connections, we will have:

Please write with any comments. Remember that your ideas have enormous value.

[1] Really there are more people, like  Claudio, Ernesto-Cristina, Toño, Carmensa-Flavio, Uriel, Aura…They are leaders with enormous capacities in different areas:  Toño-Ernesto-Chango in coffee, Carmensa-Cristina in providing follow up on processes, Claudio in organization. We need to take better advantage of them. Now with the decentralization all these people will be able to participate a lot more effectively.