One of the overriding experiences from my travels in Nicaragua last week was my introduction to “coffee rust,”  and the toll it will take on rural Nicaraguan lives.  Without being too biological, I want to share a sobering reality.

This fungal disease of coffee plants has been a fact of life for Nicaraguan coffee producers forever, but conditions this year provided a “perfect storm” of circumstances which have allowed the disease to impact this year’s coffee harvest in unprecedented fashion.  Some government estimates suggest that more than 30% of the entire country’s harvest will be lost.  But I know from our visits last week that the decimation of the harvest among many small, grassroots producers will be far greater than that.  For many, the coffee plague will signal the end of their livelihoods. 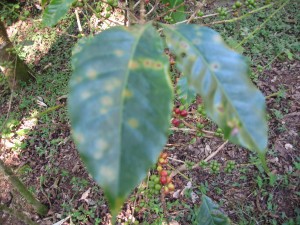 The rust might seem to pose a relatively minor threat.  Its presence is not unusual, the effects largely attack the leaves of the plants and when noticed, the spread of the fungus can be usually halted through timely and well-executed pruning.  It is regarded as one of the pests of coffee farming but not a doomsday condition from which there is no chance of recovery.  Perhaps that was the prevailing attitude of some farmers when they first noted the symptoms: large spots widening on the leaves, leaving a telltale rust coloring around the serrated edges of holes that eventually form.  But the rust carries another attribute, as well.  By destroying the leaves and thus weakening the plants, the rust creates an opening for other diseases to raid the plants.  And in this year’s cycle of production, that other disease was something called antracnosis.

Antracnosis kills the coffee plant.  With deadly consistency, it ravages the plants with amazing speed and ruin.  It is an infestation which, in most cases, cannot be eradicated by any means other than uprooting and destroying the entire plant.  That means renovation, or planting new coffee trees, is the only way forward for the farms afflicted.  But with a minimum of three years before new plants yield a harvest, it’s a strategy that many rural producers cannot afford; three years without income is not an option.  And for the rural impoverished, acquiring financing on a non-collateralized basis for three years is only a pipe dream.  Even Winds of Peace will struggle with project request circumstances like that.

One of the afflicted areas is that of our women’s cooperative partner, COMUNEC.  (See my blog of February 2, 2012, “The Simplicity of Joy.”)  We have worked for more than a year with these women, who have shown determination, focus, a penchant for hard work and a joy in the undertaking of it.  They demonstrated success in both their organizational development as well as their coffee-producing activities during their first year, and have shown great excitement in approaching their second cycle of growing on their land.  And suddenly, within weeks, the awful reality of the coffee diseases took the life from their plants and their futures in utter dispassion.  As we

visited several of the small plots belonging to the women, I witnessed the face of loss, not only in the barren branches of the lifeless coffee trees, but also in the faces of the young women who had put so much hope and effort into nurturing them.  The sight is heartbreaking in both directions and can shake anyone’s optimism to the core.  The plight of these small plots is severe enough- estimated in some cases at 80% loss- that many of the small producers will not be able to recover.

Success stories here and from other funding entities often have the feel of triumph, weakness prevailing over strength, good over evil, right over wrong.  Such anecdotes make us feel as though the world is ultimately a place that makes sense, where our persistence and dedication pay off the way we all intuitively feel they should.  I like to write about those stories, too, because they allow me to tout the belief that the world is in some sort of proper order, that we can count on certain outcomes if we just know the rules of the game we’re playing.  But sometimes the outcomes don’t match the integrity of the efforts or the rules we thought we must follow.  Injustice comes in many forms, political, economic, social structures and yes, even from Mother Nature herself.  And sometimes, all we can do is to stand with our partners and be present with them in the face of loss….