Imagine a little bit with me. Imagine owning your family’s farm, located not far from where you currently live. It’s been in the family for generations now; that long history is probably one of the reasons no one has ever deigned to sell it off. There have been many offers over the years, as the farm is a prime piece of land. But it is family history and it still produces for the folks who rent it from you, and you need the income it affords you, and most of all, it’s yours. That has special meaning all unto itself, a treasure of the past that links you to your family history.

Then, imagine the unthinkable. Quite suddenly and without reason, strangers show up and claim your family’s farm for themselves. They claim that the farm never really belonged to your family at all, and because you have wrongfully claimed it as your own for all these years, they are filing papers to appropriate the lands for themselves. The renters are driven away, not wanting or daring to be in the middle of the dispute. Your rental income is gone and now you are required to go to an attorney, to court and anywhere else you have to in order to protect what you know is yours.

The disposition of this mess is, as you fully expected all along, in your favor and the courts declare that the land really does belong to you. But as you prepare to contact the previous renters and invite them back, you’re astounded at a new development. While you and the “invaders” were battling it out in court, a third party has suddenly shown up on the property and says it’s theirs. As unbelievable as it may seem, this nightmare has turned from awful to worse! Not wanting or being financially able to engage the attorney again, you turn to the local mayor’s office, with the court’s edict in hand along with your affidavits of land ownership, and the mayor says he’ll take it all under consideration. You can’t understand what could possibly need considering in all of this, but after all, you are known to play by the rules and wait for the civic process to work as it should.

The day following your plea to the mayor, you drive the several miles to the farm, just to see what might be happening, and you are horrified to see the acreage dotted with small, green, metal outhouses, maybe t twelve or thirteen in all, scattered all over the acreage! 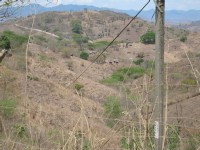 They’re a blight on the fields, completely out of character with the land and having no apparent usefulness at all (unless the squatters have some digestive problems). It’s absolutely untenable, and you can’t imagine what these monstrosities are doing across the land. You head back to the mayor’s office to register your outrage, only to confront a more monstrous reality. The mayor declares that your family’s farm is now under his jurisdiction and that it is his intention to make substantial improvements to the property and, in the process, claim eminent domain. He states that he can do this because of the many improvements that have already been made to the farm. You’re incredulous: “the outhouses?!” The mayor calmly explains that they are just the start of the many improvements that he has in mind to more fully develop the land for possible sale, and which will serve to strengthen his claim to the lands based upon his “many improvements.” He suggests to you that you can go back to the courts and make your claim, but in the meantime he will continue to “develop,” thus enhancing his claim upon your land.

Of course, this isn’t a dream at all. It’s a nightmare, one of those experiences that could never really happen because of the utter absurdity of it all, disconnected, surreal events that have no semblance to reality as we know it. But this is quite literally the circumstance facing the Indigenous People of Talpaneca in Nicaragua. Following a pattern of the past hundreds of years, the Indigenous people fight over and over again for recognition as a people, for rights that are centuries old and for simple justice in the most basic of claims. The irony here is the same as it is in North America: those who were here first are treated as last.

To be sure, any of the Indigenous people of Nicaragua have both cultural and social problems that get in the way of their sustainable success, as all populations do. The “old” models of leadership, including payoffs and pandering Indigenous patrimony to the wealthy, are deeply ingrained habits. But the added difficulty of a populace and a government that have repeatedly refused to acknowledge the Indigenous has also forced a reliance on alternative systems that generate some sort of rewards, even if for a few. If a people are not permitted to function within the prevailing social and cultural system, then they will create an alternative of their own to best access what others already have. And the cycle of exclusion and denial continues to feed upon itself.

I returned from my most recent visit to Nicaragua to find strangers visiting at my house, enjoying the peace and comforts offered to any callers. But they were guests and when I told them of my fatigue, they took their leave as they should, and I could rest in the peaceful confines of my own home….