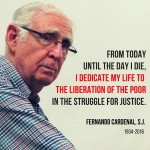 The inevitability of mortality is no solace when we lose someone whose life has transcended the usual boundaries of what it is to be a human being.  We know that whatever one’s legacy is to be, it is certain to come in time, whether we are prepared for it or not.  When we learned the news of Father Fernando Cardenal’s illness several weeks ago, there was collective hope and prayer that his time had not yet come and that he might recover to extend the remarkable legacy of his life.  But it was not to be.  Despite several rallies in recent days, Father Fernando died Saturday, at age 82, an age that belies the enormous impact of his life.

Neither this site nor this writer can pretend to adequately express what Father Fernando has meant to a world which refuses to see and people who ignore the truth of the poor.  (There are ample locations to learn of the Nicaraguan priest’s background and life story; visit them, and understand the kind of person the world has lost.)  He became the voice and patron of the impoverished, in many ways at the cost of his own vocation and voice.  Indeed, he was expelled from the priesthood for his continued educational work with a revolutionary regime which in the 1970’s overthrew the longstanding Somoza dictatorship in Nicaragua.  Such was his commitment to those who possessed no voice of their own.  (And such was his commitment to his faith, that he earned his eventual reinstallation to the priesthood years later.)

His story, recounted in part in the recent autobiography, Faith and Joy, (and assisted by WPF colleague Mark Lester and Kathy McBride), is a life lesson to make even the most egocentric among us re-think our  own journeys and legacies.  But such was Father Fernando’s gift, to speak for the poor, and for the rest of us, in ways that could touch us profoundly.  I met with Father Fernando on four separate occasions.   I can share without shame that upon each occasion, the passion of his words and the depth of his dedication to “the small people” prompted tears-  of joy, of admiration and of self-reflection.  For Father Fernando, his calling was crystal clear: “I cannot accept that people live this way.  As a human being and as a Christian, I cannot accept it.  It has to change.”  I found it an impossible perspective to refute.

Even at his age of 82, it was still too soon to say good-bye to a life of such inspiration.  We needed more of him, more words of hope and perseverance for the poor and more words of encouragement and for introspection among the rest of us.  We all conduct our life journeys with too little of either, and now one of the important instructors of our consciences is gone.  Take a moment to learn who he was.  His loss begs for for prayer and remembrance….