In recent years the magical word for generating development has been productivity, and it has been said that the path to it is innovation. Taking on this idea, in this article we ask ourselves a 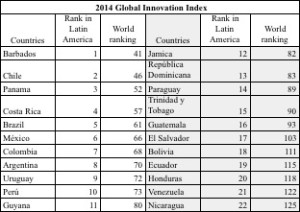 The Global Innovation Index (GII) of 2014, based on input indicators (institutions, human capital and research, infrastructure, market and business sophistication) and output indicators (knowledge and technology, and creativity), shows the positions of 143 countries, and within it, the ranking of the countries of Latin America: see table. Barbados is the most innovative country of Latin America, but on the world level it is in position 41, followed by Chile and Panama; while Nicaragua is in last place of the Latin American countries and in number 125 on the world level, followed closely by Venezuela and Honduras. In 2013, one year ago, Costa Rica was the most innovative country in Latin America, occupying position 39 on the world level, Guatemala at 87, El Salvador 88, Honduras at 107 and Nicaragua at 115. In other words, Latin America as a whole dropped in their positions, particularly the countries of Central America.

The World Bank, studying Latin America from 2006 to 2010 (Lederman, Messina, Pienknagura, and Rigolini, 2014, Latin American Entrepreneurs: Many Firms, But Little Innovation) expressed doubts about the sustainability of their growth, that is due more to the rise in prices of raw materials, and that the emergence of many firms reveals, in comparison with other regions, high entrepreneurship, but independently of their size they show a deficit of innovation, expressed in their investment in Research and Development (R+D), patents, introduction of new products and management practices.

Idea of innovation and conditions that contribute to generating it

What does innovation mean for both institutions? The World Bank thinks that the economy in Latin America is growing slowly because of a lack of innovation in companies, including the Latin American and Multinational Enterprises that operate in Latin America. So the companies are introducing new products less frequently, invest little in R+D, their patent activity is low, and they hire people with less studies at the university level. To have an impact on innovation, the WB suggests legal rights, transparency, industry and commerce policies, quality human capital, policies for supporting R+D, and policies for increasing competition and narrowing the gap in human capital (more engineers and scientists and less sociologists and macroeconomists). Taking up again the work of Schumpeter (1911, The Theory of Economic Development), they think that “the successful entrepreneurs are people who transform ideas into profitable initiatives,” and that it is a matter of “entrepreneurship that emphasizes novelties for the market”, which is in line with the neoliberal approach, of freeing markets in protected sectors, and that the private sector is the motor of innovation.

Under these liberalization policies and investment enviroments for promoting innovation, the GII states that innovation is no longer restricted to the R+D laboratories and to the publication of scientific articles, and thus takes on the OECD-2005 definition (Oslo Manual): “An innovation is the implementation of a new or significantly improved product (good or service), a new process, a new method of marketing, or a new organizational method in business practices, place of work or external relations.” If previously innovations were done by experts in closed places, now the GII thinks that the capacity to innovate is a skill of exploiting new technological combinations, and that it is incremental innovation “without investigation.” For that reason the GII proposes that innovation centers be created under the leadership of the large corporations that are the local “champions” with the participation of the government, enterprises, academics and society, in order to develop innovation capacities in clusters, inter-regional networks and value chains; these “champions” would support the innovations with capital and connections, facilitating the creation of knowledge, and with bridges to the commercialization of ideas; and that policies might exist to attract these “champion” companies that will invest in businesses, ensuring the participation of experts.

Seen in this way, the international ranking rewards those who are seeking markets, adapt to the system, with an individualistic vision, directed by large capital enterprises that include expert engineers around technologies. Is this the type of society that we are looking for with the innovations?

Let us review some innovations. The invention of the wheeel in prehistory shortened the distances between places, the telephone reduced our dependency on the wheel, internet eliminated geographic borders and connected people around the world…Florence (Italy), with the support of the Medici brothers, brought together a group of geniuses like Da Vinci and Michelangelo that drove the Renaissance. The Apaches resisted invaders for centuries because of the igalitarian and decentralized social organization, that when a leader (nant’an) fell, another and another would appear. Bill Wilson and other alcoholics understood that it was easier to fool the experts than those who were in the same situation as they were, and based on rules of free entry and exit, a commitment to not drink for 24 hours, no one in charge and everyone in charge…they created Alcoholics Anonymous (AA). Toyota revolutionized the car industry with team work mechanisms, quality incentives, continuous improvement, and the search for the balance between centralization and decentralization. A family from Paysandú (Uruguay), together with others, dealt with the theft of their fencing wire, understood that wire was sold in rolls, which is why they cut the wire, nailing a piece from one post to the next. Ron Rivera (Nicaragua), along with dozens of artesans, innovated Filtrón (ceramic filter for potable water) that is saving the lives of thousands of people around the world.

These innovations challenge the status quo and are done in collective environments. They appear as something technical, but they challenge what is conventional and logical, are “absurd” in the beginning (Albert Einstein), connect things (Steve Jobs), see a different world in which they want to live (Anthony Robbins); associate things, question, observe, experiment and create networks (Dyer, Gregersen, and Christensen, 2009, The innovator’s DNA); and have high aspirations, as Michelangelo says. It is not going after the market, seeking profit, individually, directed by large capital enterprises, competing with products, or – as Peter Drucker said – with “business models” and believing that there is only ONE path, but changing the way of living itself (Steve Sheppard), pushing the limits of reality in any area, following different paths, and doing it in families, networks, friendships, companies, clusters…In Latin America these forms of innovation call us to seek equity, contribute to the climate and build paths with societal models.

René Mendoza has a PhD in development studies, is a collaborator of the Winds of Peace Foundation (http://peacewinds.org/research/), an associate researcher of IOB-University of Antwerp (Belgium) and of the Research and Development Institute, Nitlapan-UCA (Nicaragua). rmvidaurre@gmail.com