One of the many needs within Nicaragua is that of fighting against abuse, of helping the sexes- and men in particular- to understand the needs, rights and expectations of all members of the society.  Abuses of women, in particular, take all forms: physical, psychological, economic, and social in nature, and to an alarming degree.

The United Nations Development Programme’s (UNDP) report, published in September 2009, revealed that at least 25 of the 45 women killed in Nicaragua in the first half of 2009 were victims of domestic violence.  When she presented the outcome of the investigation, national police chief Aminta Granera stated that of the more than 65,000 women who reported that they had suffered some form of abuse, only 15,000 filed a formal complaint with the police. The women who pressed charges had suffered the worst abuse, including sexual assault, bodily injuries, mutilations and torture, Granera said. More specifically, 4,129 were cases of domestic violence, 2,253 were cases of sexual assault, and 8,645 were cases of physical and psychological harm, such as threats, blackmail and verbal abuse.  “The rest of the victims kept quiet. This shows that even though it is the leading public security problem (in Nicaragua), it is the least reported crime, and, therefore, the one with the greatest impunity,” Granera said.

In light of the reality, Winds of Peace has long maintained its support of women’s groups which seek to raise awareness of such problems and to help both women and men recognize the physical, emotional, family and economic costs related to such abuses.  One organization to receive WPF support is Foundation Sacuanjoche Women’s Group, located in and serving the

department of Matagalpa.  The women who run this group are professional women whose mission is simple if difficult: promoting community development through health and social outreach, while defending the human rights of the family, especially of women and children.

Teaching women about their basic human rights is one thing; getting the men

in their lives involved in the education process is quite another.  Yet this element is critical to the Sacuanjoche initiative.  We were pleased to receive an update about the progress being made in this regard and the pictures illustrating the significant participation of men in this education process in some very rural locations.  These are places where accessibility to education on topics like these has been very limited, at best.

One might think of educational efforts like this as good, worthwhile work that probably has its number of challenges.  And then I stop to think of what it must be like to arrange for seminars wherein the main participants are men and the primary presenters are women; where the transit to the classroom is often very long, very difficult and partially on foot; where the topic to be discussed is something in the men’s behavior which is unacceptable; where the behaviors being challenged have been largely acceptable in the culture for generations; and where the investment of the participants’ time is in conflict with earning a day’s income.

In light of all these drawbacks, that men attend at all is a remarkable fact; the odds seem overwhelming.  But it’s critical work that needs doing and the Sacuanjoche Women’s Group  is making a difference in these rural lives.  You can hear it is the classroom discussions and see it in the faces of the “graduates…..” 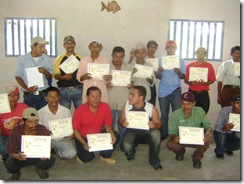