We share the complete text of the letter that we have delivered to the Subcommittee for the Prevention of Torture and other Cruel, Inhumane or Degrading Treatment or Punishment of the United Nations:

Subcommittee for the Prevention of Torture and other Cruel, Inhumane or Degrading Treatment or Punishment

On April 18, 2018, as a consequence of the social security reforms, peaceful protests broke out in different regions of the country which were met with an excessive use of lethal force on the part of the National Police and paramilitary groups.  The disproportionate use of force gave way to national demonstrations in demand for justice and democracy that also have encountered as a response repression and restrictions on the right to demonstrate.

The governmental repression has been maintained for nearly two years, and has passed through several phases that have pursued objectives and have had different characteristics. In each one of the phases the repression of the government has significantly raised the levels of violence against the population, especially against leaders of citizen and political organizations, journalists and human rights defenders.

Under governmental direction the excessive use of the police force was established, along with the presence of parastate armed groups who acted with the acquiescence of the police and the army, as well as the execution of a state strategy directed at preventing and criminalizing the right to peaceful protest and mobilization. This strategy is reflected in the behavior of all the different State institutions: the National Police, the Ministry of Health; the Judicial Branch, the Public Ministry, and the Medical Legal Institute, and on the other hand, the Legislative Branch, directing their behavior to providing legal formality to the impunity of the perpetrators, in addition to trying to control and intimidate the relatives of victims, threatening them with losing the benefit of  amnesty if they repeated [their behavior].

In short, a sustained and systematic use has been made of cruel, inhumane and degrading treatment in the context of arbitrary detentions. Following the protocol of Istanbul,  and after the technical and independent expert analysis of the physical and psychological consequences of freed political prisoners, dozens of cases have been able to be documented on the part of the formal and informal social control systems (National Police and para-police forces), of physical, sexual and psychological torture, as well as humiliating treatment and bad treatment.

Since April 19, 2018 to now the National Police, accompanied by para-police groups and armed civilians, have carried out hundreds of arbitrary detentions, including of minors between the ages of 14-17. These detentions have been massive and indiscriminate, within the framework of different demonstrations, as well as during and in the months following the so called “Operation Clean up”.

In 2019 with a selective logic against leaders and activists, these detentions have taken place in different cities of the country. The Interdisciplinary Group of Independent Experts of the Interamerican Commission of Human Rights in their Report on the events of violence that occurred between April 18 and May 30 of 2018 point out several elements connected to this policy of arbitrary detentions, and observed a “devious use of the exercise of legal faculties of detention, and thereby their arbitrary nature remains undeniable.”

Patterns of human rights violations have resulted, starting with kidnapping or illegal detentions, the ineffectiveness of the recourse to personal exhibition, as well as in hearings and oral trials.

The authorities who are obligated to fulfill the law and constitutional guarantees have acted in an arbitrary, discretional way, and in express violation of the law, without exception, the people who have been illegally detained, have had their right to the presumption of innocence violated.

The people who have been jailed and are being prosecuted because of the criminalization of the exercise of their human rights, have been removed from their natural judge, captured by orders of authorities without mandates, or kidnapped by armed civilians who operate with the Police, have been taken to illegal centers where they have remained detained and the presentation to judicial authorities happens beyond the 48 hours that the constitutional norm establishes, in some cases after 96 or 150 hours of their illegal detention or abduction.

I attach the Patterns relative to the detentions of political prisoners in the national context starting on April 18, 2018.

Likewise, I attach the preliminary list of people detained and political prisoners on March 26, 2020.

That in the framework of what was declared by different authorities of human rights organizations, particularly Dr. Michelle Bachelet, the High Commissioner for Human Rights,  the freedom of all political prisoners be demanded of the state of Nicaragua, because they have been captured not for having committed crimes, but for exercising fundamental rights and because the reality of the COVID 19 pandemic demands it.

Luis Almagro, Secretary General of the Organization of American States

This list-report is an updating of the information on arrests for political reasons, and of political prisoners who remain in jails on March 26, 2020, as a result of the social and political crisis that began in April 2018.[1] The preliminary list was  constructed by an interdisciplinary and diverse group that systematized the information provided by human rights organizations, civil society organizations, territorial networks, activists on social networks, organizations of relatives of political prisoners, people released from jail, defense lawyers and citizen denouncements. Likewise, it is supported by the reports offered by the Blue and White Monitoring team, that daily reports to the Blue and White Unity, the Civic Alliance for Justice and Democracy, as well as national and international civil society and human rights organizations on people abducted, killed, wounded and persecuted for political reasons in the country.

Since the publication of the last list-report of political prisoners, published on February 13, 2020, in the period between February 14 to March 26, 2020 a total of 58 people have been arbitrarily arrested for purposes of political persecution in Nicaragua, of that total 48 are men and 10 women. Of the total people arrested in this period 43 have been freed, be that the same day, or between day 1 and day 3 of their detention, in the case of another 3 of them more information is being gathered, and finally 12 people remain in jail and are added to the complete list of political prisoners.

During the period analyzed a phenomenon known as the “revolving door” has been identified, which is a dynamic where the regime arrests and frees a similar number of people. This practice allows the regime to continue making use of arrests as a strategy of deterrence against the political participation and organization of dissidents, and, on the other hand, reinforces their official narrative of normality and deny the existence of people arrested and political prisoners.

What follows is the earlier graph that shows the revolving door effect between February 14 and March 18, 2020:

Source: based on report from Blue and White Monitoring and different sources of verification

The preliminary figure of political prisoners on March 26 rose to 70. Of that total, 9 were detained for more than 48 hours, as of now without being presented with a judicial arrest warrant, 61 are facing judicial processes, of whom 28 have been sentenced, and 2 of those people, Yader Antonio Polanco and Jhony Alonso Castro Hernández, have a cassation judgement.

In terms of location, we found that of the 70 political prisoners, 4 are in the new installations of the Judicial Support Office, 13 are in some police station, and 53 have been transferred to the penitentiary systems of the country. Among those jailed in the penitentiary system, according to information from their relatives, 2 are in maximum security cells (known as “the 300”). In demographic terms, currently there are 69 men, of whom 2 are minors and 1 female political prisoner.

Recaptured and political persecution of those released from jail

During the period analyzed, a total of 140 reports[2] were able to be systematized of political harassment (threats, attacks and raids) directed against freed prisoners and relatives of victims within the context of repression. According to the reports received, this harassment they receive mostly from the Police, and to a lesser extent from armed civilians, and from partisan organizations, followers of the regime.

Of special concern is the case of 11 people freed from jail who have been re-incarcerated, in other words, political prisoners who were freed, and have been captured again, and who now face charges against them again for reasons of political repression and persecution. These cases are made more visible later on in the list in the column “recaptured ex-prisoners.”

Within the context of the COVID 10 epidemic, the population incarcerated in Nicaragua are in a situation of special vulnerability, due to the precariousness and overcrowding of the jail cells, the lack of health conditions due to the limited access to potable water, in addition to the respiratory diseases that persist in the penitentiary system. For this reason we demand that the Nicaraguan State carry out all the necessary actions to preserve their lives, including the change of preventive measures with special attention to the population with greater risk in the face of the epidemic for reasons of age and chronic illnesses.

Of special concern have been the multiple denouncements on the part of relatives of political prisoners against the La Modelo National Penitentiary System which has been denying them the entry of gel alcohol and cleaning and hygiene products in the weekly packages that they prepare for their relatives, which are primary needs for fighting the pandemic that we are facing on the worldwide level, another concern of the families is the disinformation about COVID-19 on the part of the authorities of the National Penitentiary System with the political prisoners, as well as the lack of safety measures and behavior protocols, not just within the System but also for the visits and delivery of family packages, as well as the continuation of the judicial processes of the political prisoners in hearings without taking safety measures.

In what follows we present the preliminary list of political prisoners within the prison on March 26, 2020. We have marked with an “x” those cases of freed prisoners recaptured for their quick identification. We urge the citizenry in general to carefully review the preliminary list of this report. If you know a political prisoner who has not been registered, please communicate with these telephone numbers: +505 8879-3343 and +505  8687-3298. 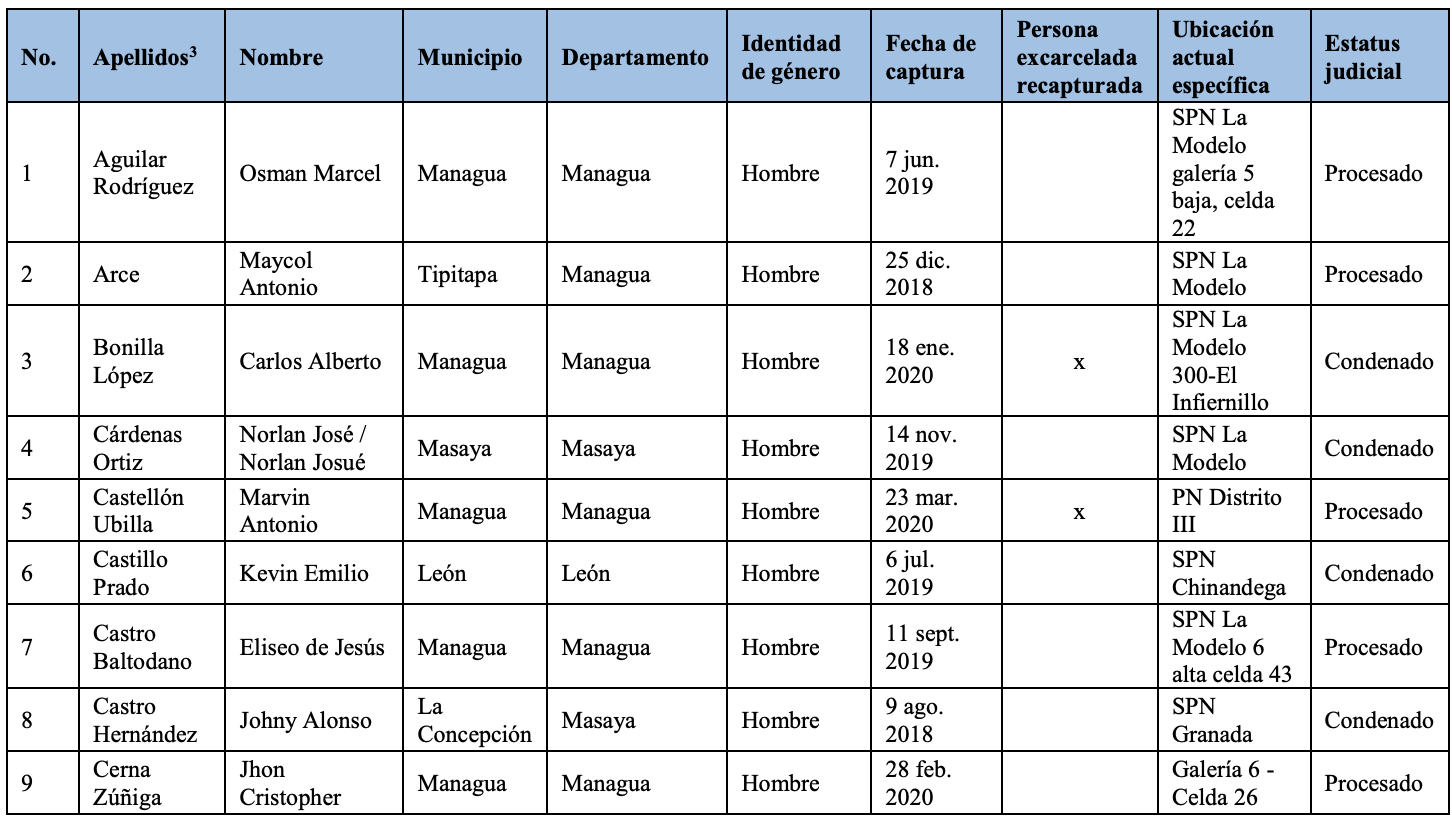 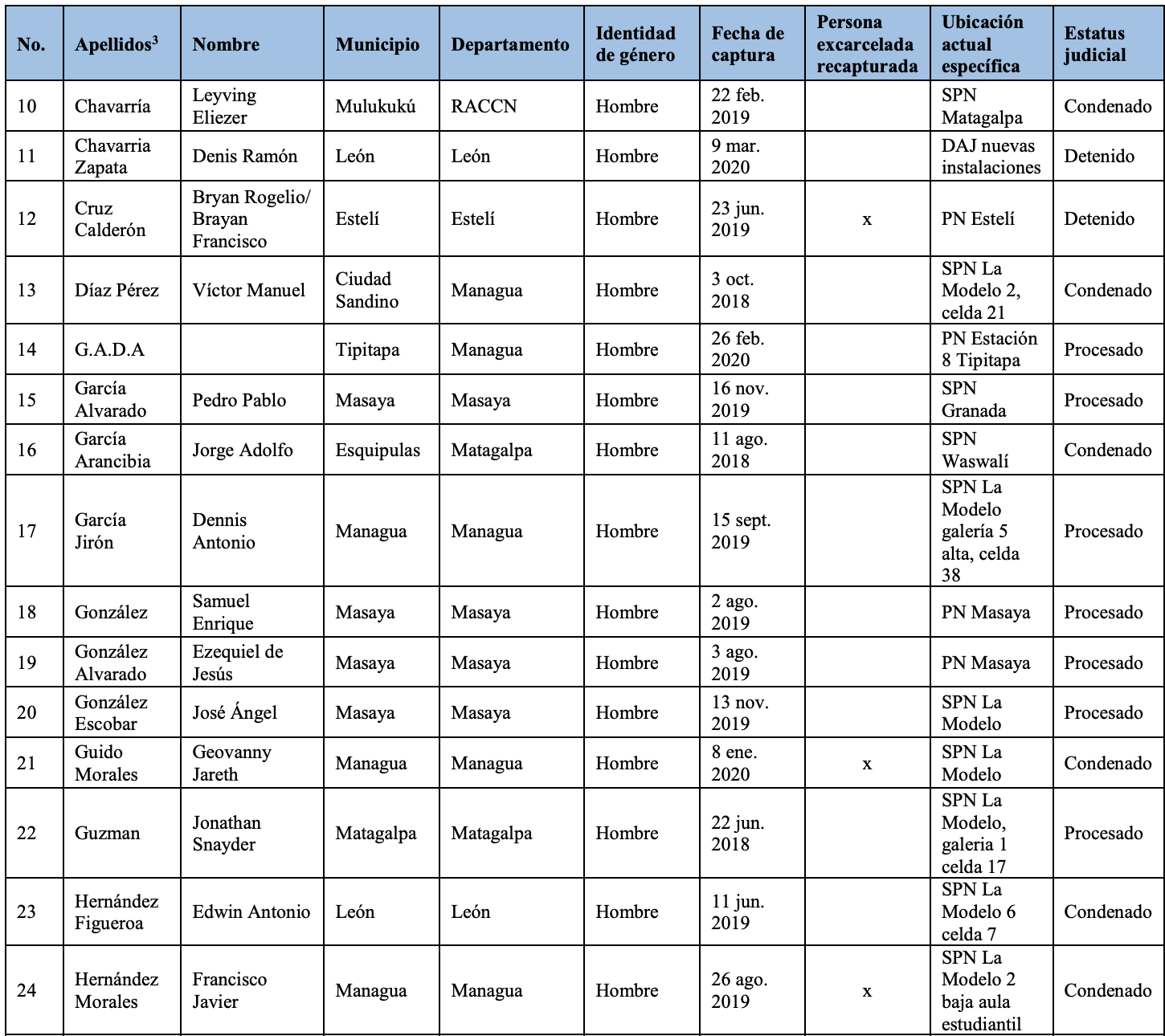 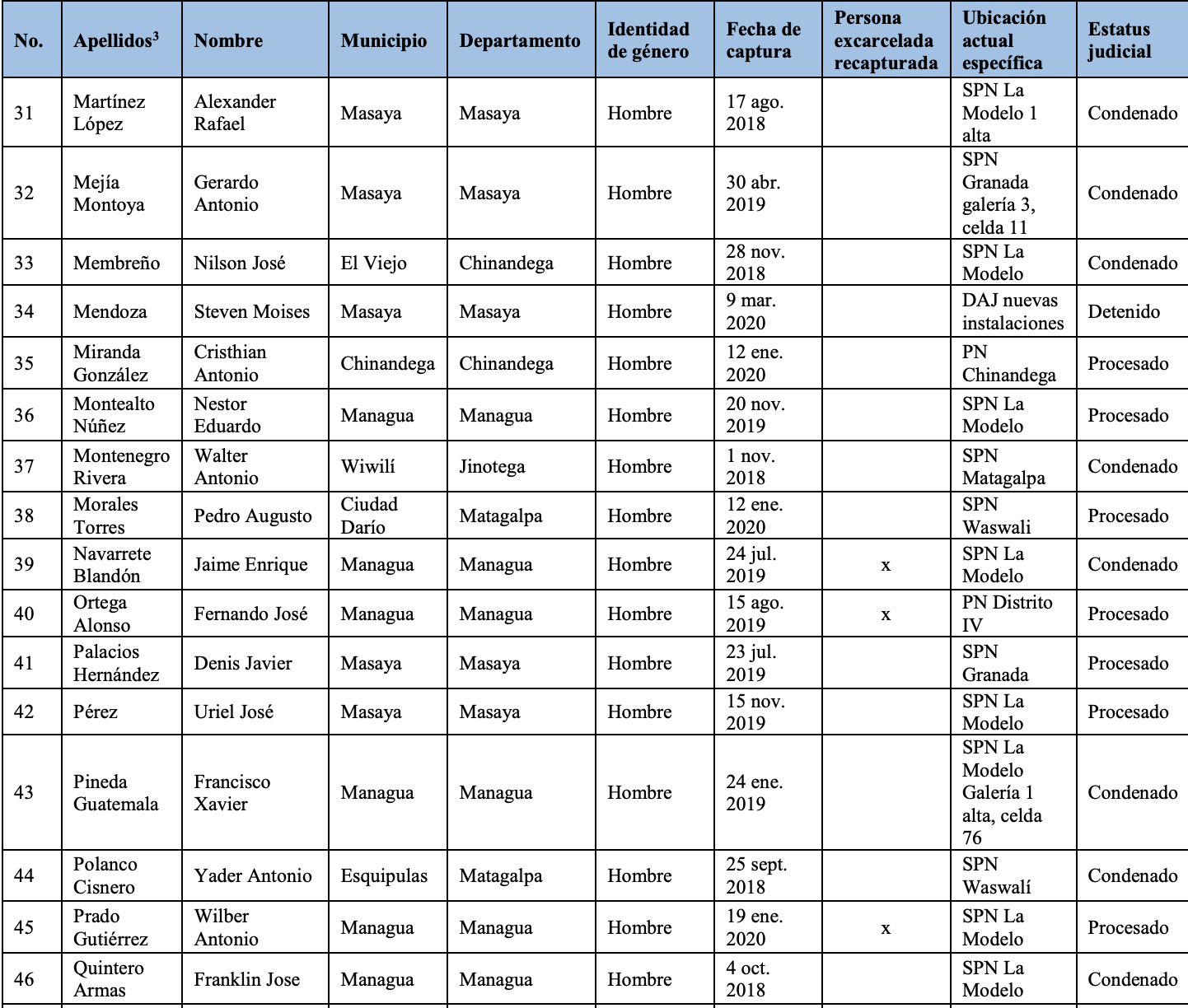 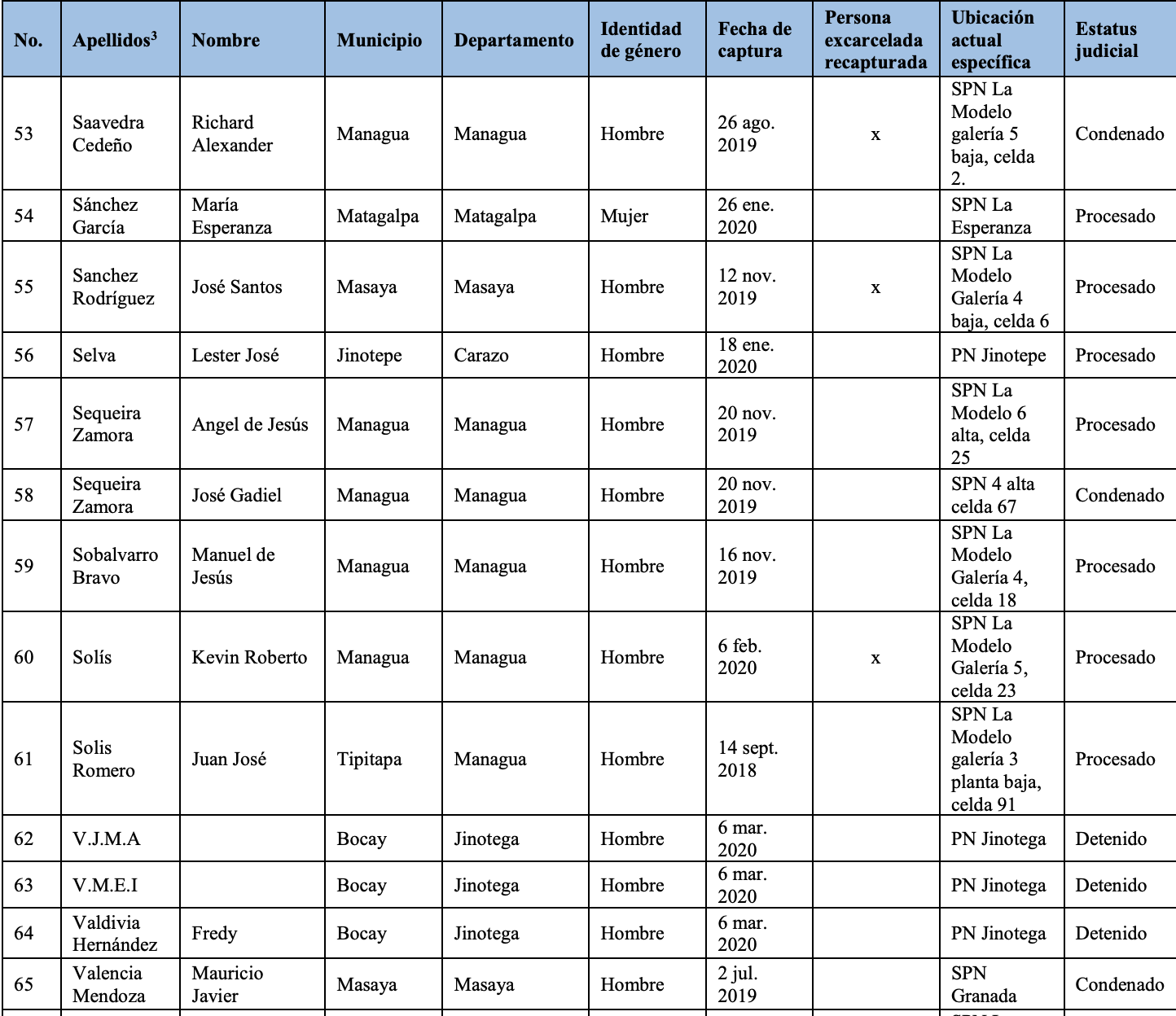 [1] Given that the neither the Judicial Support Office of the National Police, the Justice System, nor the Penitentiary System provide official information, the information of these lists is gathered from denouncements on social networks, media monitoring and public denouncements, as well as the denouncements of relatives or the citizenry in general to national human rights organizations. Therefore, their verification has not been possible in all cases and there can be a margin of error. The information contained here is from public access.

[3] In accordance with national legislation, the names of minors are omitted, leaving only their initials. Likewise we have omitted the names of prisoners whose families do not want their names made public.