“Passing on the gift”, an innovative mechanism for erradicating poverty

“These hungry children do not need a glass of milk, but a cow”

An innovative mechanism for erradicating poverty is “passing on the gift”, a mechanism invented 70 years ago. We describe it in this article, analyze its erosion and suggest recovering it.

The novelty in its origins

Dan West, a farmer from Ohio, working with the Quakers and Mennonites, directed a program that distributed milk rations to children during the Spanish civil war (1936-1939). There he came to understand that those children did not need a glass a milk but rather “a cow.” On returning to Indiana, West promoted that vision among his neighbors and the Church, founding Heifer International Foundation, and in 1944 sent the first group of bred cows, donated by local farmers, to Puerto Rico.

The idea was that farmers with cattle would donate to other

families, so that they might have a “cow” that would give them milk for years, instead of a “glass of milk” for days; the families who received it would donate the first calf to another family–passing on the gift, now keeping the cow, in an unending chain. Its principles included being donors to one another, and all that within a religious environment that helped to build trust, faith and social relationships, that they accompanied and made the chain continue.

This innovation assumes that there is dialogue among the families, a study of their real needs (they are not going to give a calf to someone who already has cattle, but in accordance with th

e conditions of the places and the families) and a shared decision between the communities and organizations like Heifer. There is a harmony between endogenous and exogenous factors, in accordance with the circumstances.

When Innovation loses its novelty

“Passing on the gift” has been applied in a good part of the countries of Africa, Asia and Latin America. Heifer International uses it; as well as other aid organizations with and without the advice of

Heifer. It has varied over time and also in different places, some continue with bovine livestock,  others go with sheep, pigs, camels, poultry…They have also been adding environmental aspects.

The accompanying Diagram illustrates this system for poultry. One woman receives 6 improved hens, and crosses them with her native rooster. The three month old chicks resulting from the crossing are given to three other women that she chooses. Then each one of the three families chooses a family to give them a similar number of poultry. Along with the chicks, know- 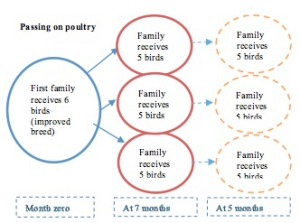 ledge is also transferred on the preparation of concentrates, construction of homemade incubator, improvement plan, poultry management, production and financial records. It is a “passing” of products (poultry) and knowledge, while at the same time social relationships are deepened.

Its great potential is the possibility that it become an unending chain, but it has been losing the essence of its novelty. The chain begins with resources (material and non-material) from international aid, and the attention of the families is toward that organization; the chain ends when the project ends. The initial innovation was, more than a “cow”, the vision that emerged in one experience, responding to felt needs, now poultry, pigs or cows are provided to families that many times already have one and their real needs are different. The initial innovation combined exogenous and endogenous factors, now the implicit message is that “what you have and are does not have value”, and the fact that there are different breeds of poultry and different management in the same community goes unnoticed. The initial innovation included a base of social capital that nourished the “passing of the gift”, now the networksand their institutions are ignored, and instead they come in preaching values. The more organizations like Heifer grow, the more they modernize and receive large amounts of resources, and the less they study the realities in which they move, the more they turn the “passing of the gift” into a decontextualized recipe. Something that creates dependency could have counterproductive effects, increasing poverty instead of reducing it.

Many other innovations, like the Peasant to Peasant Program, that started in Mexico and expanded to the rest of Latin America, have “died on the vine” in turning into a project moved only by international aid. How can the innovation of  “passing on the gift”  be recovered? First, following the rules (“whoever receives, gives”; “the calf is born and is given to another family”; “delivering the calf and sharing knowledge about its care”), adapting the novelty to the realities of the families and communities; 1) not giving a pig that eats more than a family, or that is a “tiger” that eats the hens; 2) recognizing that no one is so rich that they cannot receive, nor so poor that they cannot give, and that “no matter how screwed you are you always have something to give to others” (President  of Uruguay José Mujico, 2014), which is why the inital resources like the “cow” would come from ranching families in each country.

Secondly, innovating progressively following the advice that in Nicaragua, L. Arguello (2009, The government maintains a curative health care system and Nicaragua needs a preventive system) gives us: “if you distribute animals, it should be in this order: improved hens, rabbits, pelibuey sheep, tilapia fish, pigs and cows. And all with the proper prior training and accompanying it with environmentally agricultural techniques: soil and water conservationm composting, humus based on earthworms, crop rotation…”

Finally, the accompaniment of this process is done by the board of directors of each organization; the local government monitors and audits it; the Universities study it and disseminate their findings for the training; and international aid mediates so that the initial resources are provided and the relationship among “donors” gets cultivated.

The “passing on the gift” is a mechanism. The real innovation is that each organization takes it on, recreates it based on their reality and vision, and makes it unending – gradually (from one family to another, from one organization to another) and progressively (from poultry to…cattle) – sustainably, causing this process to take on the “snowball effect” for poverty reduction.