The Catholic Bishops conference issued this pastoral letter yesterday, after pro-governmental groups attacked the barricade students had held at the UNAN, and the Catholic Church nearby where the students ran seeking refuge. Two students were killed and the heavily armed pro-governmental groups would not allow the students to receive medical treatment or be evacuated from the church, fired on the group inside the church that included a Catholic priest and a US journalist. Representatives of the IACHR denounced the attacks and there were many photos of ambulances prevented from entering the area as the National Police cordoned off the area. There were also reports of sanctuaries in Catholic Churches being ransacked and consecrated hosts strewn about the floor.

“ All people have the right: 1) to their private life and that of their family. 2) the inviolability of their home, their correspondence and communications of any type. 3) to the respect of their honor and reputation. 4) to know all information that the state authorities have registered about them, as well as the right to know why and for what purpose it has that information”. (Constitution of Nicaragua, Art. 26)

That day will be a call to all Nicaraguans, especially the police, military and the rest of the public employees and those whose conscience is telling them to not continue supporting directly or indirectly all these situations from the government or party of the government, so that they might seriously reflect on the grave and urgent historical situation that we are experiencing, make the decisions that their conscience dictates, and commit to defend life, truth and justice. We remind them that at the level of one´s conscience no one is obliged to fulfill an order that goes against the ten commandments of the law of God, particularly “thou shalt not kill.”

The Episcopal Conference of Nicaragua 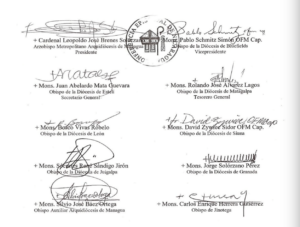