The term “shock and awe” as I have come to know it over recent years has had to do with U.S. military might and the almost unbelievable precision and impact that human ingenuity can bring to warfare.  Yet I have recently returned from another visit to Nicaragua and, specifically, the Genesis Cooperative at Ciudad Sandino.  This is the spinning plant which has been in the making for several years now, its physical plant unfolding gradually as the women (primarily) members built this place of business from the ground up (see the photos on this site under Women’s Issues- Genesis Cooperative).  During my visit there two weeks ago, my first in several months, I experienced a brand new sense of shock and awe, and one that makes the military meaning of the phrase paling in comparison.  For what I encountered was, indeed, shock and awe nearly beyond description,  in this instance for an expression of human will, vision and achievement like few others I have ever experienced.

If you look at the early photos posted on the Winds of Peace site, you will get at least a sense of the scope this project has encompassed from the beginning 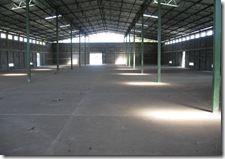 , even if only in the physical facility that has been built.  The edifice is a marvel, an incomprehensible undertaking by women and men who possessed little in the way of construction know-how, almost nothing in materials, little money, and virtually no experience in the ways of creating a business or a building.  The ground was prepared by hand.  The post holes were dug by hand; the cement girders placed in those holes by hand. The cement was mixed by hand.  The steel rebar was twisted and formed by hand.  The cement flooring was mixed and laid by hand in four-foot sections.  Take a look at the building in this adjacent picture and envision what has gone into its creation, by hand. Knowing what was required of the inexperienced, unschooled participants makes its accomplishment even more remarkable.

The impact of this project has been magnified in the face of economic and political times which have not reflected the best of human motives and aspirations; we have become numbed, in many ways, to the destructive outcomes of wars and greed and their legacies for the future.  But here, here is a tangible reminder of what the human will is capable of achieving in the best sense: a collaborative perseverance which exceeds even the imagination.  I have sufficient experience within Nicaragua to expect the unexpected from these rural teachers, but nothing quite like this.

The spinning cooperative is not functional yet.  The women await the arrival of the spinning equipment

making its way from South America.  Their efforts are now on hold, as they are forced into patient waiting for the final pieces of this immense puzzle.  Even in the shadows of their magnificent building accomplishment, the women continually seek work to improve their future operation: on the day of my visit, several of the board members were busily excavating behind the building, preparing for the plumbing needs of their plant.  There is no pay for this, no compensations, no remunerations that they can take home for feeding the family.  Those resources have to come from their real jobs, when they can find such, undertaken during other parts of the days!

I have written about the women of Genesis Cooperative here before, and it won’t surprise me if I do again.  But there is nothing redundant about the spirit and resilience that drives them in ways that you and I can barely fathom.  Every day is a challenge against the odds and so who knows when cotton might be spun in this place.  But I I know this: the shock and awe that I have seen on the television screen each night over recent years is full of death and destruction.  The shock and awe of Genesis Cooperative is full of hope and help, dignity and drive.  They are not without their conflicts and “bad days,” but they represent the better part of who we all are.   Indeed, it is the type of shock and awe which we all need more of.

If you might have an interest in supporting these women in any way, please visit www.jhc-cdca.org, the organization that has helped these women come together. (Click under “worker-owned cooperatives” to see more about Genesis.)  It’s a chance to personally experience a healthy shock and awe….