Old-fashioned, head-shaking astonishment just seemed to be the theme for my January travel to Winds of Peace partners.  After seeing the completion of the magnificent building by the Genesis Cooperative,  later in the week (reported in my previous entry here), I found myself north in Pantasma visiting our partners at the Buculmay Cooperative.  And the transformation there is no less than the miracle at Genesis. 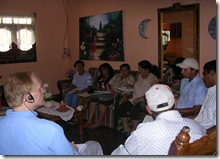 Visitors to this site will have read about the dubious beginnings of Buculmay (one of their earliest meetings in a hotel lobby, at right), how the Women’s Oversight Committee of the Indigenous people of Jinotega were illegally removed from their positions by unscrupulous leadership, how they stuck together to form their cooperative, how they were willing to receive training and, as a result, become funded for a pig-raising project, and how they have watched their own infrastructure and facilities grow.  How could such an evolution be measured to convey the journey they have been on?

We arrived in Pantasma at mid-morning.  Chairs were needed at the cooperative site so Mark drove the truck to haul the seats while I walked the half-mile or so with Julieta, President of the Cooperative, and 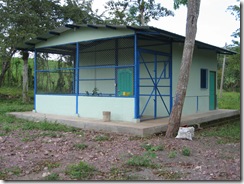 Ligia, our consultant with the Indigenous communities. Now, I had visited the site just last August, so I knew the progress that they had been making on the buildings and the preparation for the animals.  Still, to see the facilities nearly complete and ready for production, and to hear the cooperative members report on their organization, strategies and preparedness was to encounter a moment of amazement for these resilient people.  They have literally come from nothing but their self-respect to a moment of potentially remarkable triumph.  The presence of their offices (right), signifies the organization and formality of their intent.

The modern, expansive feeding and raising quarters (left) signify the significant scope of their endeavor, both the investment and the expectation of their husbandry, as well as the grant support that they have received as a result of their persistence and persona.  The

sophistication and environmental considerations (right) that have gone into the development of their operation would impress any “green” activist.  And the future visions that they hold, including another facility for the birthing and nurturing of newborn animals speaks to their vision of a future that is prosperous and self-sustaining (below). 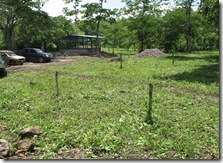 No one owns a crystal ball to tell where this journey will lead nor whether all of the promise that has been generated will, in fact, come to pass.  The reality is that in Nicaragua, things are difficult for the rural poor and just when circumstances seem to invite progress, a natural or political storm breaks dreams apart.  But especially in light of that uncertainty, the courage and outlook of the people of Buculmay is as inspiring as any human attitudes I’ve encountered.  I feel great privilege in coming to know these heroes and for Winds of Peace to be involved with their journey.

Somehow the words here are inept for conveying what has and is happening in this remote region of Nicaragua.  As in any written effort, success is only as good as the author and I fear my words are insufficient to describe the gentle determination of these individuals and the persevering group they have become.   All I can report is that I know there has been something universal, elemental at work within this cooperative; it is the power of believing, of faith, and of holding onto one another in the face of overwhelming odds.  It is the human spirit at work…. 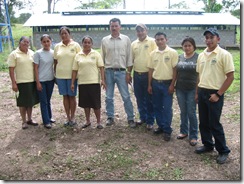