I was told during a recent trip to Nicaragua that the popular TV series “Survivor” launched a new season this past week, filmed in the Central American country.  I must confess to having never seen even one episode of the show,  But I do know that there are many winners in Nicaragua, people who were heroes long before any TV camera crews arrived.

The number of their stories is endless.  Nearly anyone you might meet in Nicaragua has a story of survival, whether against military conflicts, natural disasters, extraordinary poverty or political tyranny.  But perseverance in the face of overwhelming odds is something which many Nicaraguans have had to become good at.

What really drove this reality home for me occurred in Nicaragua recently, while I was staying at

one of my favorite hotels in the entire world, Hotel Cuallitlan in the city of Esteli.  Esteli is one of the bigger cities outside of Managua, which means that the poverty there seems somehow even more concentrated than in some other locations. To arrive at Cuallitlan, you must drive through neighborhoods as dirty and destitute as any you have ever seen. And just about the time you wonder what this place must look like, it emerges from behind a wall of trees.

in the midst of great squalor. Flowering trees and bushes, tropical blooms of all sorts, exotic parrots and Tucans surround wood cottages cut from a fairy tale.

Inside, the towels are individually 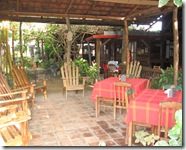 folded in the shapes of swans or ships, and the quarry tile floors emanate a welcome coolness even on the hottest  days. Outside in the courtyard, dinner is served beneath a vine-covered trellis that is so thick with growth that even the rains do not penetrate, and there is no threat to the candlelit tables at all.

I have come to love this spot and its proprietor, Marisela Rodriquez.

She is a single woman who has further garnished this garden spot with her warm and outgoing personality, someone who defines the term hospitality. Some of her grown children help her manage the place, but it is Marisela whose personal touches have transformed this spot into an absolute haven. I have remarked to her on many occasions that this is my favorite hotel in all the world, and she blushes and scoffs at such an idea. I can only marvel at what she has created.

And then last year I noticed a new decorative hanging from one of the trees in the lush courtyard. When I examined it and finally translated what I thought it meant, the reality of this garden came into focus very clearly.

Translated, “Do not envy my progress if you don’t know my sacrifice.” Further translation: “This took a lot of hard work, patience and faith that has required a great deal of me.” In other words, it takes a lot. Success doesn’t just happen and make you lucky. In one of the most impoverished places on earth, Marisela has been willing to become a successful business owner, to create her own success, to be a true survivor.

It has not been easy.    The economic turmoil of the past several years has diluted occupancy at times.  Jealousies on the part of the local, municipal government still create occasional conflicts.  And the personal strain from recent torrential rains, which have virtually flooded her property and cabins, showed in her eyes last week, despite her usual cheerful smiles.

I don’t really have an opinion about whether the setting is a good one for the action of the television show Survivor.  But I know that it is both ironic and appropriate for the it to take place in Nicaragua.  Ironic, because the true survivors, the real survivors, are already there and have nothing at all to do with a TV cast.  Appropriate because there may be few lands on earth which feature people of such resilience, strength, stamina, hopefulness and as deserving of ultimate survivor recognition.

Survivor?  Few of us us really even begin to understand the meaning of the word….