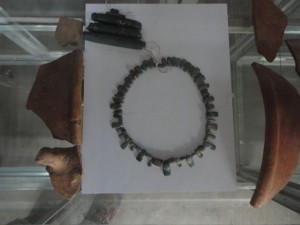 Winds of Peace has had the privilege of working with the Indigenous People of Telpaneca (IPT) for a number of years now, the two entities essentially sharing with one another.  WPF has provided funding and accompaniment, while IPT has been generous in its teaching, promoting and  contextualizing its rich history and culture extending back in time for centuries.  I have often observed that what I have learned during my WPF years with IPT has greatly enhanced  the breadth of my understanding of Native American people in the United States.  That has been a serious interest of mine for nearly my entire life, and the IPT experience has added enormously to my perspective, a shared gift from an unexpected source.

I was not surprised, then, to be the beneficiary from IPT once again, in the form of an announcement.  Recently, archaeological finds on IPT lands in Nicaragua have yielded some amazing artifacts from early IPT life, some pieces dating back 1200 years.  Nicaraguan Anthropologist Mario Rizo has written an important accounting of the finds and their significance in his article, “Archaeological Findings of the Indigenous People of Telpaneca Along the Shores of the Rio Coco.”  It’s a brief but fascinating look back at another time, but a time when the ebbs and flows of daily life preoccupied its inhabitants in many of the same ways that our time preoccupies us.  Birth and death with life in between.  Not much has changed over the millennia, it seems.

Among the items found recently is an amazing jade necklace, discovered at the presumed gravesite of an early forebear.  Among the photographs of the various antiquities, the jade necklace caught my attention for some reason.  Actually, it’s less revealing than other items of the time because other pieces have cultural depictions or artistic images of chiefs or men of the tribe.  But the jade necklace could be jewelry worn by people today.  Jade’s popularity is perhaps as strong as it was centuries ago.  And to me, it signifies something that was worn by one of these ancestors, a personal treasure which someone possessed, someone who kept this belonging close to the heart, someone who came before the rest of us, someone who paved the way, a person with as much meaning and soul and passion in their life as anyone else who has ever lived.  Imagine him or her.

It turns out that we do not make this life journey alone.  There are countless others who have come before us, ones who have kept their places in the evolutionary chain of human development, upon whose lives and works we all build.  The jade necklace is a reminder of who we are as an extension of the many who have come before.  For the current members of IPT, the necklace and its fellow artifacts are a direct connection to a heritage and a culture desperate to be sustained.  The IPT work tirelessly to remind themselves and the rest of us that their heritage is rich and real and deserving of preservation.  Those who would deny the history of Indigenous patrimony anywhere in the world might just as well deny their own history:  truth  is not a part-time reality to suit convenience.

For the rest of us, the necklace is a humbling reminder that in the end, we all leave behind some kind of legacy.  It may be an impact made upon someone,  a reputation forged, a fortune left behind, a career admired or despised, a family of descendants, or simply a jade necklace to be honored sometime far in the future….

2012 has been designated by the United Nations as The Year of the Indigenous People, a recognition of their cultures and connections to sacred places, as well as their forced disconnections from those places.  I am coming to understand them.

I write this posting while visiting Madeline Island on Lake Superior.  My parents once owned the house I’m in and the land on which it sits.   It was their home for ten years, establishing what was for them  a place of beauty, rest, inspiration and spirituality beyond their imaginations.  Returning to this spot after an absence of almost thirty years has yielded an entire range of emotions: excitement at the return itself, to re-visit the place my mother and father regarded as home; curiosity in seeing how things have changed over the course of a generation; wonderment at the still-pristine forests and cliffs which constitute the Island; a sense of awe at how changeless the land has remained, even after decades of pounding from the lake and sky; wistfulness in recalling the Island as the honeymoon destination for my wife and me, some forty years ago; sadness in recalling my parents’ decision to leave the property with the advancement of age; joy in reliving the memories of the site I always regarded as my favorite place on earth.

Reflecting on these things, I have discovered a new dimension to them, a new feeling about both their meaning and their importance.  I have always understood the natural beauty of the surroundings and the value of stealing away to such a place of retreat.  I have felt the spiritual renewal inherent in the forest and lakeside.   But what I have begun to recognize is my connectedness to this place that extends well beyond its physical dimensions.  There is a sanctity about it, something that reaches far beyond immediate senses, a sacredness which doesn’t simply please or soothe the soul, but actually becomes part of it.  Sciences may posit that cohesion between place and person exists in poetry alone, but experiences teach a very different conclusion.  In a real and physical way, I find that I am actually part of  this place, and it is a part of me.  Portions of my life are here.  Portions of my lineage are here.  I have taken from this place and I have given to it.  Neither the land nor I can ever be quite the same after we once connected.

It occurs to me that this is also the foundation for the centuries-old claims of disenfranchisement by Indigenous peoples in Nicaragua and throughout the entire world.  Losses of language or land constitute egregious diminishment whenever they may occur; it is no less profound a loss than the extinction of an entire species of life, evolution which we often fight with tenacious resolve.  But for the Indigenous, the resistance is not simply about loss of land, but the loss of an entire identity, of connectedness, of culture, of the soul itself.

In our own ways, and often without conscious effort, we all seek to discover access to the wholeness of life, that part of our existence which ties us into the fabric of the universe, a place where we belong, where our presence makes sense of our being.  We share a deep longing for such connectedness, to help make sense of a world that often feels very disconnected and senseless.  Loss of a people’s sacred places destroys such ties.  The injustices suffered by the Indigenous extend far beyond the value of lands; their more important claims articulate the unjust destruction of their essential values and patrimony.

It is likely an unfair comparison to make between a small parcel of woods that once belonged to my family and ancestral Indigenous lands; one relationship was forged over a mere forty years, while the other has been developed since the dawn of Indigenous existence.  But the importance of walking where my father walked, of knowing the places that my mother held as precious, and retracing my own footsteps as a young man- all within the context of this inland sea and  its grounded blemishes- has clarified something elementally important to me.  We are part of the whole, each with our own linkages to this cosmos we inhabit.  And those links are our lifelines, our context for living, a portion of what defines us and makes us both importantly unique and universally the same.  Removing the links weakens the chain of all of our lives.

Yesterday I worked on the wood perimeter fence that my father built.  I split wood from trees that my mother may have planted.  In the evening we sat quietly in the room where my entire family gathered decades ago.  At night I heard the gentle lapping of the lake water against the foot of the cliffs and I gave thanks for the sacred places in my life….