The cooperative movement grew inspired in the basic values of mutual aid, responsibility, democracy, equality and solidarity, and the ethical values of honesty, transparency, social responsibility and concern for others. So it expanded from attempts to improve the distribution of earnings among the workers and to socialize the means of production, trying to demonstrate that in an environment of mutual collaboration the relations between workers and bosses could develop harmoniously (Owen), moving on to propose social and economic systems based on small farming communities (Falangists) without the drive for profit and oriented to job creation (Fourier). With the emergence of the consumer textile cooperative in Rochdale (England), the bases were set for the cooperative movement. Since then the sector grew under cooperative forms of consumption, savings and loans, agriculture, housing… in the entire world. 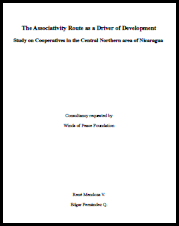