“Suddenly Laura Mars can see through the eyes of another…..”

It’s been some time since I added new thoughts to this site; you can either thank me or curse me as you deem appropriate. But it hasn’t been for lack of activity or experiences, as I’ve made three trips into Nicaragua since the first of the year, with number four to commence just a week from now.  But these trips have been quite different from my usual Foundation visits: the first one I made with my wife Katie and daughter Molly. Trip number two was with our entire Winds of Peace Foundation Advisory Committee.  An excursion in March was undertaken in the company of the executive team from Augsburg College in Minneapolis, home to The Center for Global Education.  I have discovered that there is nothing quite like traveling with others to sharpen the experiences encountered en route.

For starters, maybe you’d agree with me that the best way to learn something new about the world is to experience it personally, to travel there, somewhere, to see first-hand what can be seen.  That’s what each of my previous trips to Nicaragua has provided to me, a personal and up-close look at the country, its people, its problems and its glories.  Each time I’m there I learn something new about the place, and myself, too.  It has been an education par excellence, and a privilege to absorb it all on behalf of Winds of Peace.  I really can look inside of myself and see the changes, the different perspectives and the growth that is taking place.  (Who would have guessed it at my advanced age?)  Yet the recent trips taken with others has seemingly magnified the experiences; I have returned home each time feeling more full, more absorbed, more tired, more enlightened.  In short, I’ve been allowed to see Nicaragua through many sets of eyes,  multiplying my own experiences.

For instance, when my daughter Molly returned from our week in January, I naturally wanted t

what she took away from the adventure.  I could not have anticipated her answer: “I was really struck by the sheer number of children.  They seemed to be everywhere and I couldn’t tell what they might be doing or where they were going.”  I suppose that I had become somewhat accustomed to the omnipresent kids, but for Molly their numbers and the perception that too few were headed for or returning from school stood out.  When I asked the same question of my wife Katie, one of her observations  hit home in its simplicity and truth: “It (Nicaragua’s reality) is too real.”

The Winds of Peace Advisory Committee is seven in number, and six were able to make the February trip.  I value these every-other-year  gatherings in Nicaragua, because it gives all of us an opportunity to see where we have been, where we might be headed next, and how we feel collectively about the wide range of projects that we see.  I can anticipate some of the positions and feelings of my colleagues by now, having traveled and 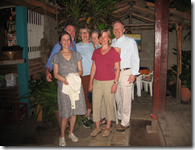 met with them on numerous occasions.  But on our final evening in-country during the February trip, we drove through the streets of Managua amidst the usual crowds of street people, seeking to wash windshields, sell baked goods or simply receive a handout.  At one stoplight, a young woman approached our van with a baby in her arms, a child which might not have been more than several weeks old.  Window-by-window she beseeched each of us to take pity, yet this is a temptation that we have learned how to avoid.  But as each of us forced our eyes straight ahead, I noticed a single tear running down the cheek of one AC member.  I watched from the seat behind her as she dried her eyes and whispered, “I hope that I never forget that woman and her child.”  Even for those who see themselves as sensitive to such plight, it is far too easy to look past it.  Familiarity breeds contentment, and through another’s eyes I, too, wanted to weep.

In March, I had the good fortune to accompany the Augsburg College President and his

executive cabinet.  Their mission was to experience something of what The Center for Global Education has to offer its participants in cross-cultural experiences, and to do so in a very personal, face-to-face way.  The eight members met an array of personalities and circumstances while there, ranging from a session with the President of The University of Central America to visiting the Managua dump-site, the actual home to scores of Nicaraguans who derive their entire lives from its contents.  For the better part of a week, I was privvy to the reactions and emotions of this dedicated group as they experienced the realities of Nicaragua.  Moments of subdued silence punctuated the hyper-activity of the short week, and I felt anew the discomforts, the questions, the awe, the awakenings of being on-site.  Participating in their reflections and observations, I was able to feel the power of an initial experience all over again, though my fellow travelers.

About the time I begin to feel as though I have come to know or understand something, it’s time for me to connect up with some other folks, to hear what they are hearing, to feel what others are feeling, to try to see what they might see.  When I can do that, everything old is new again…..