The “ladder” and conditions for rethinking “not leaving anyone behind”

-the big producers increase their coffee areas, the small ones produce less, and we are all from the same cooperative–María observed in the assembly

-we are on different steps of the ladder –responded Claudio.

-The small producers should not hold offices, being “bit players” is their fault- adjudged their administrator.

– If we looked at one another and helped one another, maybe our cooperative would be a cooperative- María shot back, while the big producers smiled.

Claudio Hernandez, a peasant cooperative member, by saying that “we are on different steps” in the cooperative, referred to the social inequality in his cooperative. In this article we want to study the hierarchical side of this phrase, and how to move beyond it in the communities.

The force of structures

In the story the administrator presupposes a vertical structure, classifies the small producers as “bit players”, and puts them outside the range of officers. This image of the “ladder” is the structure of hierarchical power that comes from societies, families and absorbs any organization or institution. 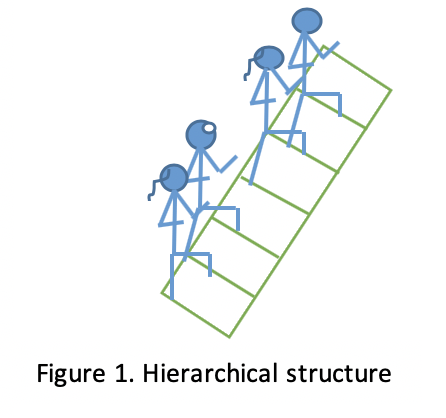 Figure 1 shows people going up the ladder, there is no other way up. On that ladder it is not possible for a group of people to be on the same rung; they would fall. Most aspire to go up the ladder, even though they are not able to get close to it. If someone makes a bid to go up, they alert the one on top, “ he is going to get ahead of you”. The one who reaches the top unseats him: “get down so I can get up.” Only the “one in charge” is on the top of the hill, “the more authoritarian he is, the more he does for us”, “I am nothing without him”. Even though those who generally reach the top are men, if a woman reaches the top, the ladder does not change.

This structure defines the position of big and small, of those who have, and do not have rights in a society. It names people to the offices of organizations or institutions, turns leaders into politicians or technocrats. Likewise, the age structure in families defines their members: those who “are good” for doing physical tasks, like “a load” for those who no longer can carry one because of their age; the spouse “discarded”, replaced by a young woman. It is a structure that is reinforced by animalizing human relations: “he is going to better you”, assumes that the person left below is an animal, which is worse if the person “bettered” is a woman. If someone praises a boy it is because “he is looking at his shoulders” – for carrying, labor, an object of exploitation. It is a language that defines, “she is female, I am male” – but using words in Spanish that generally are used to designate the sex of animals. A male, a macho is, as the writer Octavio Paz said, “awesome, the father who has abandoned his wife and children”, and who feels proud of it.

It is a structure that takes voice and agency away from people and reproduces rules contrary to good humanity. It says to the impoverished, “we will always need a patron”; to the abused woman, “he is my husband, he has the right to beat me”; to the Evangelical pastor, “I am the anointed one, I speak in the name of God”; to the priest, “only I can celebrate the Eucharist”; to people in communities and neighborhoods, “God has a plan for us”, “the leader has a plan for us”. As the Spanish saying goes, “no one goes to heaven without a ladder”.

There can be a peaceful or violent revolution in a country, church or any organization, be it school, sports club or communal organization, that revolution is basically “get rid of you to put in me”, “getting ahead”, and repeating “I am the anointed one”/”leader, direct us!”/ “spouse in pants or skirt, direct us!” They can sing that they are “new men” or dress in habits, the ladder is the same. Everything changes, so as not to change. We see cooperatives like this whose members, men and women, rebel against their presidents or managers, replace them with other people, and in a short period of time, the chosen person turns into the “top man” or “top woman”.

From within these structures the slogan of many international organizations “leave no one behind” can be understood as pulling the impoverished person to the “ladder”, so that they are not left behind, while the ladder continues being the “ladder”.

How can we change to really change? If we ignore the ladder, it will be like the sun, it will keep us from seeing the stars and will make us repeat the rule of elites: “without the leader, there is nothing”, “without legality and office in the town, there is no organization”. We need to distinguish between the ladder (structure; sun) from what is outside of it (stars). Identifying the ladder to reveal that it was made by human beings, that its reproduction is not automatic but mediated by human interpretation, which is why it can be undone or redone. Let us recall what Max Weber said, it is not the rule of courtesy that makes one tip the hat, but the interpretation by people of that rule. Understanding this helps us to create conditions to awaken and recreate our identities, to recognize those structures and then look for other paths.

María in the above story says, “If we looked at one another and helped one another, maybe our cooperative would be a cooperative.” There is a new interpretation there, which is the awareness of looking for alternative options to the ladder, seeing the stars. How?

From communitarian perspectives we can put on the shoes of different people, even though first we need to take off those we have on. From those “soles” it is not possible to put the “ladder” to one side, because in the end it is in our own minds and feet. Hmmmm! After identifying it, how can we proceed? 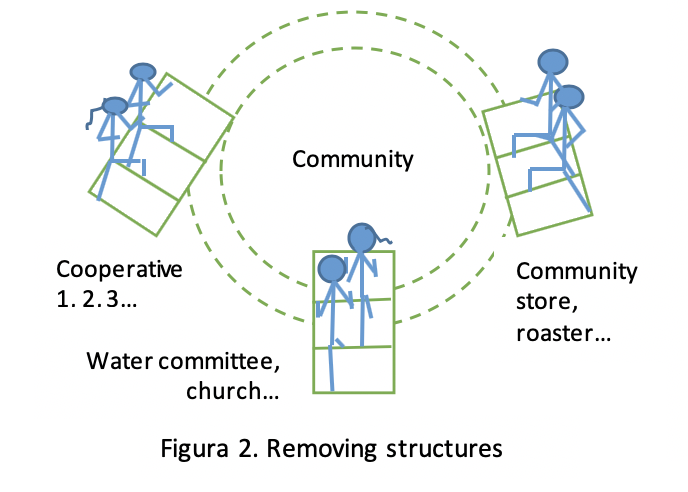 Following Figure 2, we propose three steps. First, forming organizations with membership in just one community, and limiting their size: that it not have more than 50 members, nor that it only grow economically. This will keep a leader from becoming the “big chief”, because his organization will be relatively small, and its membership will be more informed about their organization from living in the same community or micro-territory. This will reduce the size of the ladder and pull it toward the community.

Third, expanding and generating connections between different organizations on the basis of already existing and emerging relationships of collaboration is a challenge. For example, the delegates of the word of the Catholic Church tend to be part of dense relationships. If a good part of that social base are also members of an organization, they contribute to trust, which is a basic asset for building connections; for that reason it is necessary to show those dense relationships. When a new organization emerges, it is like opening a new channel for previously dammed water to flow; and if that organization, in contrast to traditional ones, is composed of women and/or young people, fresher and cleaner water flows through that channel uniting more lives.

In these connections we are not talking about alliances. So far, we are not aware of interesting and lasting alliances. We see that when organizations multiply, collective and community actions also multiply; e.g. road repair, disease prevention actions, like the current COVID-19. We do envision the possibility of forming second tier organizations in the same micro-territory, which would be practically the opposite of the “big headed dwarf” model of the second-tier cooperatives that exist today – something to discuss in another article.

The change of structure that we are proposing is discovering the “ladder” which we ourselves are part of, and move beyond it by reducing its size, multiplying ladders, and expanding their connections in the same community or micro-territory. These perspectives in the long term can democratize our societies and offer better conditions where the voice of people is heard and listened to, shared leadership flourishes, and collective innovations are possible.

This process, no matter how praiseworthy it might be, requires hard work for hours beyond “the work day” on the part of some people in the communities and those who accompany them. Because that “ladder” is like the roots of a bad weed that lives in our minds, resists being discovered, and on being discovered fights to persist and intensifies its domination in old and new organizations.

From community perspectives, it is not a matter of “not leaving anyone behind.” It is a matter of each person getting closer to others, and on doing so, they draw closer to their own capacity and potential. Then the community will be more than the sum of its parts.

[1] René has a PhD in development studies and accompanies rural organizations in Central America. He is a member of Coserpross (http://coserpross.org/es/home/), an associate researcher of IOB-Antwerp University, and a collaborator of the Winds of Peace Foundation (http://peacewinds.org/research/).