This past week more internal documents from the Vice President were leaked to the press, showing her role in the directing the FSLN social media response to the horrific scenes of open repression that flooded social media in April 2018. It was precisely the social media recording of the repression that led to the massive demonstrations of the population against the government. The government´s disinformation campaign was explicitly confirmed by the editor of the official FSLN media “El 19 Digital” at that time, Carlos Mikel Espinoza, In interviews he gave after resigning.

In an interesting parallel, at the time these documents were made public in Managua, Meet the Press did an interview of the Russian journalist Masha Gessen that dealt with similar tactics in an entirely different context.

The orders from Murillo, after the killing of Álvaro Conrado

New emails from the Vice President reveal her desperation to impose the message of her trolls and the message “we are going all out.”

Almost two and a half hours after the child Álvaro Conrado Dávila was deadly wounded on April 20, 2018 in the field next to the National Engineering University (UNI), the Vice President Rosario Murillo sent an email ordering the militants of the FSLN to propagate official messages on social networks that were dominated by the blue and white protestors.

The email contained two attachments: the first, a memo with orders to the Sandinista militancy to redouble the discourse of the regime on social networks. And the second, a “strategy” with the “principal points and aspects” to reinforce it.

It was 2:08 in the afternoon. At that time the video of the wounded Álvaro Conrado went viral on social networks. In the 19 second video– that circulated like wildfire on cellphones – the lament of the adolescent can be heard: “It hurts to breathe”. A testimony that moved the country and ended up turning the citizenry onto the streets against the regime of Daniel Ortega.

The memo denoted the growing desperation of the acting president of the country and de facto head of the FSLN in the absence of Daniel Ortega. The document is signed by Rosario Murillo, and urges the party militancy to act quickly in the face of a scenario that was getting out of their control, in the streets as well as on social networks.

“We are deploying on all Fronts, and this should be reflected in our active participation in Social Networks, tweeting, responding, re-tweeting so that the Christian, Socialist and Solidarity Ideas, our Faith, our Hope and our Confidence in a Future of Rights and Full Well-being be ratified in the Communications”, reads the memo.

The memo forms part of a series of emails written by Rosario Murillo which are in the possession of CONFIDENCIAL. In November 2018 we published a good part of these communications, but sources connected to the FSLN leaked more documents in the format of emails to CONFIDENCIAL, that offer insight into the role of the Vice President administering the social and political crisis in its first days. The emails cover from April 19th, when Murillo ordered “we are going all out” and the first three deaths were produced, to April 25th when it was announced that the regime would attend the first national dialogue called by the Catholic Bishops.

A propagandist from the JS[1] for the strategy

From the beginning of the protests the social networks were the breeding ground for the rebellion against the Ortega-Murillo regime to acquire a national scope and become known internationally.

Since April 18th, when the joint repression from the Police and the thugs in the Camino de Oriente became the detonator, social networks became a tool for denouncement and convening of the students in revolt. In spite of the governmental propaganda machinery and the censure of the communications media, the social networks were monopolized by the citizenry. The flashpoint of this virtual dynamic was the dramatic video of Álvaro Conrado drowning in his own blood.

The orders of Murillo during the April rebellion

In El Carmen – presidential home and offices at the same time – the Vice President understood that “the active and proactive presence in networks” had dwindled. “This is the world of today, and this is the form of  communications for the world of today”, Murillo warns in the memo. 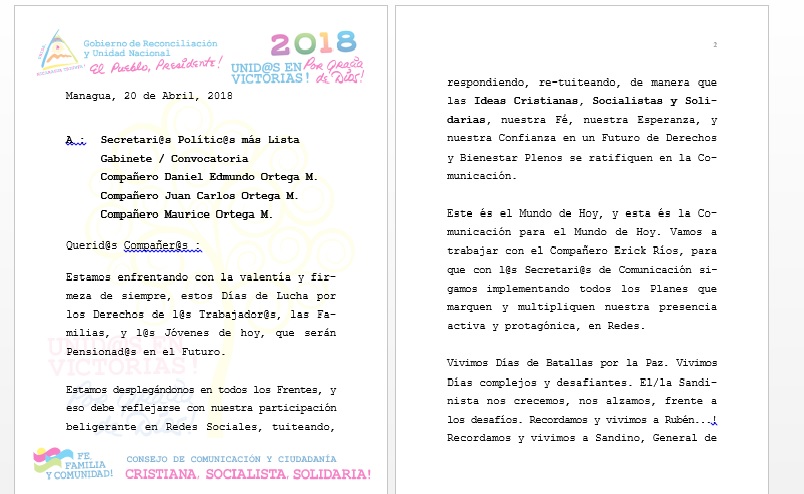 The Vice President presented Erick Ríos in the memo as the person responsible for implementing the social network strategy. Ríos is a fervent follower of the presidential couple. His fidelity has situated him as one of the national leaders of the Sandinista Youth, the arm of the party obedient to the Vice President. Ríos describes himself in Twitter as a “philologist and communication theorist, Digital Marketing and Neuro Marketing, information technologies”; at the same time that he directs the “Redvolución” propaganda initiative.

“We are going to work with Compañero Erick Ríos, so that with the Communication Secretaries  we might continue implementing all the Plans that mark and multiply our active and proactive presence in Networks”, orders Murillo´s memo.

After presenting Ríos as the person responsible to the National Political Secretaries, the Cabinet of her husband, her sons Daniel Edmundo, Juan Carlos and Maurice – directors of television channels 4, 8 and 13 respectively – the Vice President got to the point with the manual for the strategy, contained in another attached document.

“Activate all the Sandinista militancy who have their accounts in Facebook, Twitter and Instagram and those who do not, create them around our message with the following hashtags (previously mentioned)”, states the manual.

The manual of Murillo for the social networks consists of five points. The second reads: “create a unique communications channel through WhatsApp with the communication compañeros of the FSLN through number 8720-1455 in order to facilitate and make all our strategy operational on Social Networks.”

The third point of the manual of Murillo confirms what many social network specialists denounced for years: That the Government has “troll farms”, in other words troll factories that work exclusively on the creation and propagation of content favorable to the regime, but also disinformation content and to discredit those considered opponents.

The term “troll farm” is recently coined and means: “an organization whose employees or members try to create conflict and turmoil in an online community through the publication of deliberately incendiary or provocative comments”. In the incipient social and political crisis of April. Vice President Murillo ordered: “Equip more laboratories in all the provinces and municipalities of the country.” 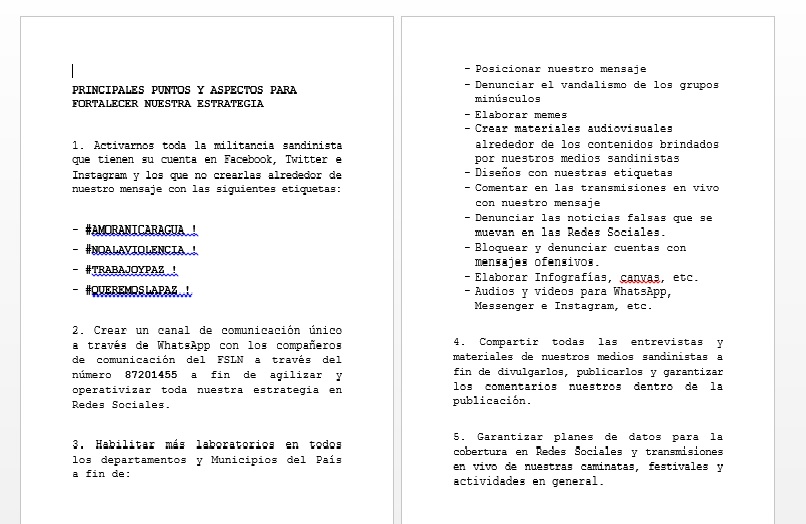 The purpose of these “laboratories” is divided into 10 precise actions: “Position our message, denounce the vandalism of minuscule groups, prepare memes, create audiovisual materials around the content offered by our Sandinista media, designs with our labels, comment on live transmissions with our message, denounce false news, block and denounce accounts with offensive messages, create infographs, canvas, etc, audios and videos for WhatsApp, Messenger and Instagram”.

Sandinista sources told CONFIDENCIAL that the largest “troll laboratory” was installed in the Nicaraguan Youth Institute (INJUVE), an installation populated by baseball, basketball, volleyball, soccer stadiums, and track and field tracks, where Álvaro Conrado aspired to run as an athlete in the 400 and 800 meter races. The staff for the laboratories came from public institutions;: “The youngest employees, natural users of social networks, were taken there to work full time.” (The information was corroborated by another email that the Vice President sent on April 22nd. She justified the absence of the employees in their places of work under the following argument: “the compañeros who have been accompanying the process of the defense of our project will remain in that same task”).

The fourth point of the manual indicated that all the interviews and materials of the communication media of the regime should be shared by the militancy, as well as “ensuring our comments within the publication”. The fifth and last point demands “ensuring data plans for the coverage of social media and live transmissions of our walks, festivals and general activities”

Order to take Managua unleashes massacre in the UNI

After sending the email with guidelines on social networks, in another communication the Vice President ordered immediately taking over “the iconic points of Managua” on the afternoon of April 20th. “With directions from our National leadership, we must ensure the immediate presence of all of our institutional militancy in 61 iconic points of our city, as well as all the needed logistics, in coordination with our District Political Secretaries, we will be in possession of these points indefinitely”, mandated the email.

Based on that order the offensive of armed gangs was unleashed, who joined the repression that the Police maintained in the sector of the UNI and the Metropolitan Cathedral, even after the bullet that shot Álvaro Conrado. That email arrived at 4:05pm to more than 200 addresses of individual emails of the members of the Agatón Sandinista Leadership Council  (CLS), organized in all the public institutions, as well as closed lists of territorial political secretaries and members of the Cabinet.

“Finally, between 4:30 and 5:00pm the pro-governmental groups who had remained in the Stadium entered into the UNI”, revealed the final report of the Interdisciplinary Group of Independent Experts (GIEI), convened by the Interamerican Commission on Human Rights (IACHR) to investigate the massacre between April 18th and May 30, 2018.

At that moment, when the gangs entered the UNI, Marlon Manases Martínez Ramírez, 20 years old, was with the demonstrators in the northern part of the UNI and received an impact from a firearm in the cranium.

“He died that day in the Hospital. According to the legal medical report, before dying Marlon had received different blows to the head, one of them in the mouth that knocked out three teeth. One person who accompanied him, who observed the moment in which he fell wounded, indicated that he suffered the impact at the moment in which people from shock troops accompanied by the Police entered the UNI shooting”, reflected the GIEI report. “The moment and place where Marlon Manases Martínez Ramírez fell reveal that he was wounded by the actions of a group who invaded the UNI, composed of parastatal shock troops and the National Police”.

At 4:30pm, Harlinton Raúl López García, 18 years old, received two impacts from firearms, one in the anterior thorax and another in the right tibia. The gangs engulfed the cathedral of Managua as well.

Journalists from CONFIDENCIAL were providing coverage at that hour, in the zone of the University Avenue on April 20th. Within the church, horrified youth were crying and painting their names on their arms, afraid that the gangs would burn the cathedral down. When the team of journalists were able to flee from the gangs, who also beat and attacked the journalists, it began to be broadcast on the radio that Álvaro Conrado had died in the Baptist Hospital.

Other emails from the Vice President leaked to CONFIDENCIAL are dated April 23. On that day she  categorically prohibited public employees from participating in the march called by the Superior Council of Private Enterprise (COSEP).

“No worker from our institutions has permission to participate in any march, our militancy will be demonstrating in favor of Peace in our institutions. Confirm that you received this orientation at the email clsinstitucional@agaton.ni”, reads the email sent at 11:53am.

That same day, less than one hour later, at 12:41 pm, another email was sent of an “urgent” nature giving a new orientation on the march called by the business sector: “The institutions who are in the perimeter and path of the March called by COSEP, stay within the installations, those who are far away we will be demonstrating with placards in favor of Peace”.

On April 24 the Vice President sent another memo demanding “be more active in the social networks” with the message of “recovering peace”. Likewise, she ordered the municipal and provincial CLSs to “strengthen the unity of Sandinism”. By that date protests had already broken out in the historic neighborhood of Monimbó, in Masaya, Estelí and León, and other Sandinista bastions, who rebelled against the dictatorship and were repressed with a toll of more than a dozen deaths.