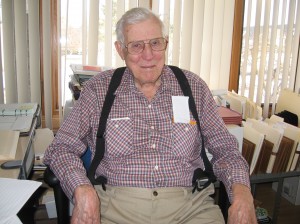 I spent some time last week with the Founder of Winds of Peace, Harold Nielsen.  As usual, we had plenty to talk about: what’s happening in Nicaragua, the state of the global economy, progress on several Foundation initiatives, the presidential campaigns here in the U. S., and more.  It may not seem unusual for two people to engage in conversation about such items, but I always regard my discussions with Harold as somewhat unique opportunities to learn, since he is now 96 years of age.  The breadth of his experiences and perspectives grows more valuable every day, and his views of the world and human behaviors in it are lessons rich with insight.  Whenever I’ve had the chance to sit with Harold and engage in such discussions, I find myself speculating about where Harold gained all that wisdom. I’m reminded of how infrequently we in the U.S. look to our most seasoned citizens for wisdom.  All too often we see our elders as being out-of-date. out-of-touch or irrelevant to modern-day issues.  Too bad; there’s a lot that we need to learn and in many cases they’re just the ones to teach us.

There were any number of perspectives that Harold shared with me last week worthy of reflection and consideration.  But perhaps the most valuable of all came not from something he offered, but rather from something he asked.  (It’s not unusual for Harold to bring me to a salient realization by asking a question rather than stating an opinion.)  We had been talking about our education initiative in Nicaragua when he quite unexpectedly changed the subject.  He asked me to describe what it had been like to work for him over the years, what his strengths and weaknesses had been, what he could do in the future to be a better leader, mentor, and influence, and how he could become better at seeing those characteristics in others.

I was startled for several reasons.  First, I wasn’t prepared for a question that required such a personal, candid response.  Second, even though Harold and I have worked more as collaborators than as employer-employee in recent years, my response required me to think back to his earlier roles in my life, when he was company owner, CEO, foundation patron, and I was his employee.  Third, in my work experiences, Harold turned out to be, by far, the easiest and most effective “boss” I ever had; analyzing his weaknesses and areas for improvement never occupied much of my thought.  While I am rarely at a loss for words, his questions left me speechless for the moment as I tried to formulate a response that was both candid and useful.  Unfortunately, I doubt that I offered him anything that he regarded as helpful.

Long after our time together, I was still thinking about those questions and wondering what there was about them which continued to hold my attention.  I’ve been asked the same such questions many times over my managerial career, but never before did the query strike me with the same degree of surprise as this time.  But I finally figured out what was so different.  The difference was that the question came from a 96 year-old man who, well after most people have ceased to breathe let alone ask piercing and introspective questions, still seeks to learn about himself, still aspires to know more about his relationship with others, still wants to know how he might become better at life.  What startled me was the recognition that his questions revealed the source of the wisdom that I have respected for all of these years.  That source lay in the unquenchable thirst for learning that Harold has had, a never-ending curiosity about himself and others and the world around us.

Far more than simply a function of advanced age, true wisdom is cultivated in the continuous drive to ask and understand, not only for one’s own edification, but for application to the circumstances of the world at-large.  Wisdom eschews the notion of retirement of any kind, giving no quarter to withdrawal, forbidding us to stop the flow of natural inquisitiveness that spurred the younger versions of ourselves.  The answers to the contemporary questions facing the youth of today might well be discovered in the curiosities of their elders over a lifetime of seeking.  And those of us in-between are in the best position of all to benefit from the realization if we can allow ourselves to do so.  Maybe all of this is well-known to psychologists and gerontologists, but it’s a first-hand observation to me.

How does a 96 year-old man expect to effect change in the way that he is perceived by others, the way in which he interacts with them, the extent of his positive impact upon them?  I’m not sure of the answer, but I love the question.  And I may have unwittingly affirmed a secret to real wisdom….

1 thought on “The Secret of Wisdom”