I traveled to Nicaragua a couple of weeks ago, likely my final trip for the calendar year, and as usual came away with a range of emotions that include hope, despair and everything in between.  We visited the Genesis Cooperative in Ciudad Sandino once again.

They continue to await delivery of the spinning equipment which is now some nine months overdue, despite its having been paid for.  The women have labored for months, and without income, to make the spinning plant dream a reality, only to run afoul of an unscrupulous U.S. businessman.  (See http://peacewinds.org/blog of August 26.)  We visited the Women of UMOYS, that remarkable group of 1,700 women from 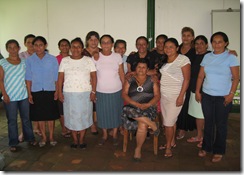 22 communities that has transformed their communities into high-functioning civic voices and transformed its members into confident, activist leaders.  We read and digested a full scholarly study on the state of cooperativism in Nicaragua, undertaken by social scientists Rene Mendoza and Edgar Fernandez at the request of Winds of 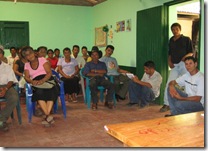 Peace Foundation.  In it, I was pleased to read about the somewhat “model” performance of one of WPF’s long-standing partners, Jose Alfredo Zeladon Cooperative and the excellent organizational work they are  doing for themselves, in addition to growing world-class coffee.  I also lamented the fact that not many other models could be found.

The study on cooperatives presents some groundbreaking work.  It identifies some of the structural obstacles that have prevented grassroots coop members from improving their economic situations more than they have to-date.  It describes some of the sociology at work when significant outside funding becomes available to a coop but then fails to find its way throughout the membership.  It identifies the weaknesses of cooperative leadership which has few models from which to draw, except for the standard hierarchical, top-down authority so long exhibited by U.S. corporations and other organizations.  (If you’re interested in seeing the study, let me know.)

In the end, the conclusions are clear:  success follows a pattern of broad participation, involvement, communication and the development of a sense of ownership throughout the cooperative.  It’s what keeps the Genesis women together when there is little other “glue” to do so.  It’s what the Women of UMOYS have used to re-engineer their lives and communities according to their own priorities.    It’s what Jose Alfredo Zeladon has employed to achieve pre-eminence in the coffee marketplace and as a stable organization that is truly helping its members to grow holistically.  I came away from the Nicaragua trip with an affirmation that the principles that seem to be vital for success in WPF grantmaking and microlending are, in fact, the principles that seem to undergird some of the most successful Nicaraguan organizations.

Within a week’s return from one of the poorest countries in the world, I next found myself in

the mountainous splendor of Sun Valley, Idaho.  The opportunity to speak to The Northwest Chapter of The ESOP Association and The Wood River Economic Development Partnership on behalf of the Employee Ownership Foundation took me to this picturesque spot which has hosted as many luminaries and wealthy guests as any spot in the U.S.   There is no poverty evident here; rather, it is a place for spending of one’s success in a decidedly luxurious surrounding.   Bald Mountain and the area were built for this.  It’s a long way from Nicaragua.

Not all of the companies present in these two speaking venues were swimming in exorbitant profits, to be sure.  Some, perhaps most, had been hard-hit by the economic recession.  All of the Chapter attendees were either from employee-owned firms or were professional providers to ESOP companies.  They came to the conference to learn more about what makes a strong ESOP, what makes a great ESOP company, where the “magic” lies in creating ESOP value.  It’s a topic that is addressed at virtually every ESOP gathering across the country, as ESOP companies (end even non-ESOP firms) strive to discover some incredible secret that will vault them to transformational success.

The presentations were exciting for me to deliver and I truly appreciated the focused interest that the attendees brought to the meetings:they really did hope to hear some bit of magic to apply during this tough economic time.  Whether they realized it or not, they received exactly that.

As I headed for the airport on Thursday afternoon, I realized once again that the message carried to impoverished Nicaraguan cooperatives and community organizations is precisely the same as that taken into ESOP companies across the country.  Where organizations build themselves holistically, with broad participation, communication with all members and with some form of true ownership stake in the outcome (positive OR negative), they stand a much better chance of flourishing, even in the face of economic hard times.  How ironic to be preaching a message of people needing to be a part of their own worklives!

1 thought on “The Song Remains the Same”