The news currents have been particularly active of late, what with the presidential election in the U.S., hurricanes roaring across the eastern and southern coasts, the economy beginning to crash in ways never before experienced and the U.S. government intervening in unprecedented ways, as well.  The stories are the stuff of international notice and importance, and the news media is consumed with jockeying for position on such reporting.  Usually, big stories command big attention.  But not always.

Don Mercedes died on August 30.  He was the President of the Council of Elders for the Indigenous People of Telpaneca in Nicaragua.  By most estimates his age was 92, though the vigor of his life, the energy in his voice and the twinkle in his eye all belied the calendar of his years.  Each time I have had the privilege to visit Telpaneca, Don Mercedes has been present, despite the three-hour walk from his home in the mountains.  (The house has a dirt floor and is made of cane sticks. Very simple.)  It was a journey which he made on foot, both ways, in order to fulfill his role as elder, as mentor, as connection to the history and traditions of his people.  Perhaps Don Mercedes viewed his entire life as one long walk on his way home; such was the constancy and deliberateness of his role in the community. 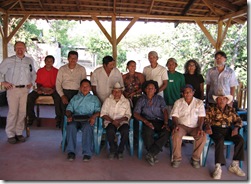 Appropriately, I found him squarely in the center of a photo that I took during one of my recent visits to Telpaneca.  There he is, exactly in the center of things, white shirt and cowboy hat, surrounded by new generations who will assume the leadership roles that Don Mercedes took on during his life.

I suppose that some in the community might have looked upon Don Mercedes as part of "the old ways," perhaps a bit of a relic who wouldn’t understand the changing ways of Nicaragua.  But not many.  For those who have assumed responsibility for the preservation of historical truth and cultural rights for the Indigenous, Don Mercedes was an important fixture between the past and the future.  His long life allowed a bridging of two ages, and even offered some lessons about what to expect in the coming age.  His importance was marked by the many Indigenous who turned out for his funeral and burial:  the young men of the community were especially affected by his death, such was the feeling and regard which they felt for him.

As a global leader, Don Mercedes possessed no standing; perhaps few outside of the Indigenous communities ever heard of him.  But he influenced the niches of his life with commitment, intent and a sense of serving something more than himself.  No world leader, no corporate executive, no philanthropist can ever do more than that.

I last had the privilege of his company on August 13, following a meeting with the leaders at Telpaneca.  Don Mercedes asked for a ride to a spot outside of Telpaneca where the footpath to his dwelling meets the road.  On the way, he noted my straw hat on the back seat of the truck and commented on how fine a sombrero it was.  We invited him to try it on and he did so with enjoyment.   Without question, the hat belonged to him and he accepted the gift with gratitude.  And I received in turn a feeling of connection with the elder, the memory of which I now treasure even more than before.

We are all connected, whether we acknowledge it or not.  It has been speculated that the beating of a butterfly’s wings in Central America will influence the rage of a hurricane in Asia. In that sense, the entire world is a poorer place without Don Mercedes.

Within days of the news of Don Mercedes, another butterfly’s wings were stilled.  But Ron Rivera impacted far corners of the globe first-hand.

Ron Rivera called his ceramic water filters "weapons of biological mass destruction." For 25 years he traveled to remote outposts throughout Latin America, Africa and Asia, teaching local potters to make what appears to be a big terra-cotta flower pot but is in fact a wondrously simple-but-effective device for purifying water.

"You put dirty water in — gray water that many communities still drink — and it comes out crystal clear," he would tell his audiences.   A recent study in Cambodia found that the filters cut in half the incidence of diarrhea, a leading cause of death in the third world, especially among children. After Hurricane Mitch wreaked its destruction upon Central America in 1998, Ron, who had been doing development work in Nicaragua for the previous decade, joined with a tiny American organization called Potters for Peace and went into high gear.

Ron often said that his goal was to set up 100 enterprises, but he died on Sept. 3 in Managua, Nicaragua. He had contracted  falciparum malaria, the most dangerous form of the disease, while setting up a water-filter factory in Nigeria.  The factory in Nigeria was his 30th.

For the last decade of his life, Ron traveled all over the world setting up microenterprises in Ghana, Cambodia, Yemen, Colombia and other countries. Many thrived, especially after he began organizing the workshops as profit-making microenterprises.   Beverly Pillers, the chairwoman of the board of Potters for Peace, said Ron’s factories had produced about 300,000 filters, selling for $5 to $25, and used by about 1.5 million people. At present, 13 more filter factories are scheduled to begin operating by the end of next year.

I never had the opportunity to meet Ron face-to-face; I knew of him and his work through his family and colleagues.  But I learned enough to recognize that Ron lived the notion that we are all here for a finite time, and as stewards we create a legacy within that frame.  His legacy became tangible and its influence indelible.

Stewardship.  Servant-leadership.  Changing the world.  There are those who profess intentions with regard to such ideas, many of whom run for public office and/or maneuver their ways to positions of status, celebrity and renown.  They appear in the news frequently.  Don Mercedes and Ron Rivera, of little places in Nicaragua, were unknown to most of the world.  And yet their departure from it leaves us all diminished, and the very world itself quietly weeps for its loss….