There’s an old saying that goes something like this: “A butterfly is lovely by itself.  But where several fly together there exists a flurry of  color and motion sensuous to the eye.  And where butterflies gather in number, one can also hear them singing songs of exquisite joy.”  When I watch monarchs gathering at this time of year for their annual migration to Mexico, I always listen a little bit harder to hear the music of their flurried wings.

I imagine the music coming from the recent celebration of women in rural Nicaragua might have rivaled that of the butterflies, because the women certainly did gather together in a big way.  Some of the poorest women from the municipality of Matagalpa came together to celebrate the Union of Organized Women of Yasica Sur (UMOYS).  They come from over 22 communities, many of them miles away from each other.  And for the past seven years they have been growing their network of members, finding their voices, advocating for themselves and their families, This is a union of very rural, very poor women who have formed a network of activists that would be impressive in any location.  Their objective is clear: to be heard.  By the governments and agencies that make decisions about their lives, by the communities in which they live, and by their families and neighbors.  It’s a tough thing to do for any group of people.  But when the prospective participants are scattered about the countryside, with almost no means of transportation, with few funds available, and from a culture which historically has not supported women’s active involvement in community and civic affairs, then to accomplish what these women have done is extraordinary.

Last month, more than 2,000 members of this network gathered  to recognize and celebrate their achievements, their influence,

their existence and their voices within their communities.  They came together as an affirmation of their collaborative work in advocating for women’s issues, lobbying for environmentally safe water practices to protect their streams, creating housing opportunities for members who have none, and demanding that their concerns be heard and

considered by those in positions to make decisions.  They have evolved into a grassroots lobbying consortium that has created not only positive community changes, but an immense increase in the self-esteem and confidence of these women.  Nearly all of the members are uneducated and inexperienced at such an undertaking, but they have grown into their roles with persistence and courage.  Seeing 2,000 of them come together is a particularly moving scene, considering the obstacles that they must face. What a proud moment for people like Ethelvina Escorcia, current Coordinator of the Women of UMOYS!

Of course, one of the major drivers of this initiative is the children.  The women recognize that for things to change in their communities and the in the attitudes which are found there, changes have to include the children.  And the kids are learning best

by observing the strength of these women and the impacts that they are able to effect in their communities.  An event like this annual gathering reinforces not only the improvements that have been brought about, but also provides a visual affirmation of the strength of these women and their collaborative efforts.  What the children see and experience in such a celebration are images that will stay with them throughout the year; over time, such views of the women’s power and influence becomes an accepted fact of life.  But clearly what they see at this celebration is an important piece of their own future attitudes and development,  male and female alike.

The Union is one which has been supported by Winds of Peace almost since its inception, through our partner organization PRODESSA.  This NGO brings an absolute social science to their work with their rural partners, encouraging and guiding the rural participants to come to their own conclusions about their needs and the best way to address those needs.  PRODESSA attempts to teach about collective decision-making, communication and how to draw the skills and talents out of the participants.  It’s a facilitative group that does some of the best development work that I’ve seen, and I was pleased to see members of

PRODESSA so  prominently featured in the celebration.  The photo at right includes Rolando (in the blue shirt in the foreground), the Executive Director of PRODESSA, who also made an address to the gathered particicpants. The gray-shirted gentleman in the left photo is Alfredo, a director of PRODESSA and a frequent contact for us.  (See the May 18, 2008 entry to this blog site for an earlier reference to Alfredo and PRODESSA.)

While I was not in Nicaragua to be able to attend this celebration, Mark Lester did attend and came away hugely impressed by the excitement and energy generated by these women, their commitment and their cause.  It’s one of the success stories from the rural corners of Nicaragua and worth noting, especially at a time of so much discouragement.

It strikes me that the human spirit evident here is like those Monarch butterflies and their joyous songs when they come together for autumn flight…. 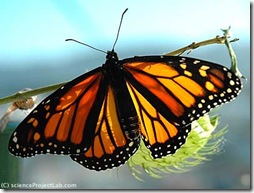 1 thought on “Where the Butterflies Sing”