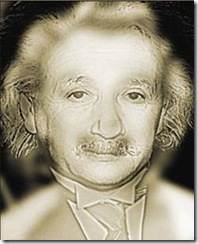 I’ve always been attracted to optical illusions.  I’m fascinated by the way something can virtually change shape and meaning before my very eyes, almost as if magic was taking place.  This one is a favorite, simply because its two images are so starkly opposite each other both iconically and in reality.  The picture of Albert Einstein is a well-recognized portrait, but if you simply step away from the photo, say 10 feet or so, Albert magically transforms himself into the smiling face of none other than Marilyn Monroe.  How this can be I’m not certain, but it clearly demonstrates the truth of the title above, that where you stand does change what you see.

I heard activist Kathy Kelly make this observation as part of a presentation during this year’s Peace Prize Forum at Augsburg College.  The simple truth of it obscures the importance of its lesson, that we cannot hope to understand the circumstances of other people without being in those same circumstances.  We can imagine, we can project, we can theorize and even hope to know what it might be like, but unless we stand in the same spot we can never truly understand.

That truth was brought home to me a couple of weeks ago as I visited some of our partners in Nicaragua. Our work is primarily in the north, so we were some distance away from the capitol city of Managua when we began to hear reports of protests, confrontation and even some violence before the National Assembly.  Supporters of President Daniel Ortega clashed with liberal party members, leading some participants to be injured in the clashes which took place.  The fracas continued for several days, with reports on the largely state-controlled news not providing very detailed or high-importance reporting.

The incident marks another chapter in the evolution of Nicaraguan governance, regardless of which side of the argument an observer may stand.  But the event elicited at least one immediate editorial piece from a U.S. writer which quickly made its way across a network which follows events in Nicaragua.  The commentary portrayed the incident as an anti-government protest, likely fueled by U.S. interests against the Ortega government, just like in the years following the Sandinista revolution.  It basically blamed the incident on a small number of agitators encouraged by outside forces.  The article resurrected motives and objectives from the past as if nothing had changed on the Nicaraguan political landscape over the past 20 years.  It called to mind a time when supporting the fledgling Central American government was a relatively easy thing to do.

On this occasion, though, the diatribe pointing the blame at U.S. interests was not so easy to accept.  As I traveled with and among Nicaraguans during these days, the sentiment being expressed by some long-time Sandinista faithful was not supportive of the government at all.  The passionate, unshakable support for the Sandinista front has eroded within Nicaragua as  President Ortega’s administration has slowly taken on many of the dictatorial characteristics of the very regime against which it fought in the war.  And while the U.S. is still complicit in undermining the Ortega government (some things never do change), the view from the streets in Nicaragua is much less clear than the U.S. author would have us believe. Many of those protesters were committed Nicaraguans seeking more democratic processes than they have seen of late.  I found that to be interesting, since it’s Nicaraguans- not U.S. writers-  who are living in and experiencing that reality day after day.

It’s an easy thing to watch events from afar and draw conclusions based on the view.  We do that in this country all the time as our political parties do everything they can to shape our views, often by illusion.  But truth is a more difficult concept to discern, and it almost always will be influenced by where we stand, both physically and philosophically….