One of the sites I visited last week was the Buculmay Cooperative, an outgrowth from the Women’s Council of the Indigenous People of Jinotega.  I’ve written before about how abused these women (and some men) were at the hands of the unscrupulous Board President, but take a look at where the coop is now!  They are in the middle of a pig-raising project financed in part by the government, and they are on track to become a model for this activity!  From less-than-obscurity to state-of-the art livestock, and with all of the recognition and self-esteem that such progress brings. 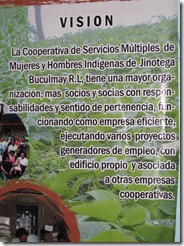 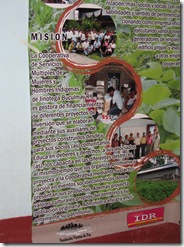 It’s one thing to develop a vision of what you want to become and a mission to specify how to get there.  But it’s another thing altogether to bring those concepts into reality, especially when you’re at the bottom of the pile socially and economically to begin with.  But with patience and a belief in the “rightness” of their independent walk, the Buculmay members are doing just that. 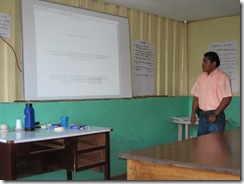 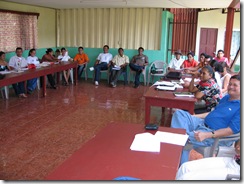 From organizing themselves into a coop to learning the basics of collaborative work, as was happening in the above sessions, the members have been eager learners on their own behalf.  Some of the rudimentary business plans they created on their very first attempts were as good as some I’ve seen in mature corporations!  It was during this training session that the government became aware of the unusual extent of education that Buculmay was experiencing.  As a result, the government approached Buculmay with the proposal to manage the pig project! 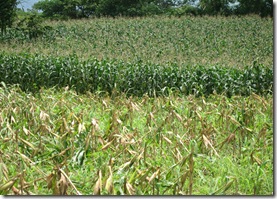 One of the means by which this project is being funded is through the members’ own contributions, made possible by the crops that are raised and sold (yes, in addition to developing the pig-raising enterprise, these folks have “real” live, too).  Availing themselves of better seeds and fertilizers (not chemicals or GMO stuff), they have vastly improved their harvests.  Just contrast the corn crop in the foreground- grown under traditional means- with the field in the background, using newer methods and more indigenous inputs.  The volume difference is overwhelming, and these women are not necessarily farmers!  This could be Iowa corn!

The residence quarters for the Buculmay pigs is not some ramshackle sty.  With technical and construction advisors provided by the government, this modern facility features gravity-fed self-watering apparatus in each stall, grated floors for automatic removal of wastes, a bio-gas facility to capture waste product gas for fuel, four separate electrical sectors for energy efficiency and more.  Here you can see the installation of the main waterline.

I’m no pig farmer, but I know organization and efficiency when I see it.  Subsequent buildings to be constructed in Phase 2 of the project will allow separation of the animals according to maturity and need.  Note Julieta on the left, President of the Buculmay Cooperative and a lynchpin in their development.  With justification, she showed us the facility with extreme pride, undoubtedly recalling those dark days several years ago when everything seemed lost.  She did not imagine this! 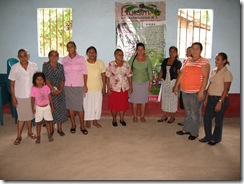 This good-bye photo captures only a portion of the membership, but the image is in stark contrast to the group with whom we met those several years ago, who wondered how they might survive socially, economically and in every other way.  They stand taller, their smiles are wider and even the surroundings in which we met are brighter.  There is certain satisfaction, I suppose, when members of your community now seek you out to ask about membership in your coop, and the adversary who has oppressed you is now quiet in the face of your earned status as a credible and important entity in the community.

Buculmay means “the place where corn becomes ground.” Basic.  Honest.  Of the earth.  It’s evident that this collection of courageous actors is true to its name….